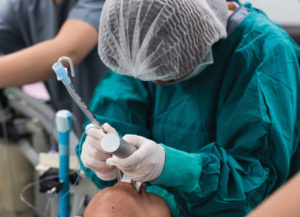 Management of a difficult airway during an out of operating room emergency intubation is associated with high morbidity and mortality.1–5 Such patients are often unstable, and advanced airway equipment and skilled assistance are less available. Emergency airway management in the patient with an unanticipated difficult airway is particularly perilous when there is limited time to develop a plan or bring additional equipment to the bedside. Current literature suggests that difficult airway management is associated with a high incidence of desaturations, failed attempts, and difficult bag mask ventilation.1,3–5

In principle, advanced knowledge that a patient has a difficult airway should reduce the risk of emergency intubation. In such patients, a plan can be formulated in advance, multidisciplinary expertise can be arranged, equipment can be made ready, and the decision to intubate can be made earlier to reduce time pressure. However, it is not cost-effective to assess the airway of every patient in the hospital (or even in the ICU) as only a small fraction of patients will require an emergency intubation.

Table 1: Questions for identifying patients with a suspected difficult airway

Patients identified by the rapid response nurses as either known or suspected difficult airways were placed on a difficult airway “list” in the electronic medical record and their hospital course was monitored over a two-month period. We assessed for the incidence of emergency intubation and difficult intubation on post-intubation assessment. We defined a difficult airway as an intubation requiring more than two attempts of direct laryngoscopy by a senior anesthesia resident (PGY-3 and above) or attending and/or the use of adjunctive airway equipment (e.g., video laryngoscopy, fiberoptic bronchoscopy). Defining a difficult airway is variable,7,8 and we expanded the ASA’s difficult airway definition9 of a conventionally trained anesthesia professional experiencing difficulty to include a senior resident because unlike operating room intubations, residents are often the first responders during an emergency intubation outside of the operating room and difficulties with initial attempts may quickly lead to patient morbidity. Documentation of a difficult airway is often subjective and inconsistent8,9 and by including the use of adjunctive airway equipment in our definition, we aimed for more objective criteria.

During the two-month pilot period, twenty-one patients were identified by rapid response nursing assessments as having a known or suspected difficult airway. Nearly 62% (13/21) required an emergency intubation during their hospitalization and 92% of those (12/13) had a difficult airway. Approximately 57% (12/21) of the known or suspected difficult airway patients were intubated emergently and had a confirmed difficult airway of which 58% (7/12) required video laryngoscopy and 42% (5/12) required fiberoptic bronchoscopy. None of the patients experienced failed airway management. One death occurred during a difficult intubation though this was in the midst of a cardiac arrest requiring chest compressions from a suspected pulmonary embolus prior to arrival of the emergency airway team.

Dr. Estime is an assistant professor of Anesthesia & Critical Care at the University of Chicago Medical Center.

Dr. Budde is an assistant professor of Anesthesiology at the University of Minnesota.

Drs. Estime and Budde have no conflicts of interest to disclose. Dr. Tung serves as section editor for Critical Care & Resuscitation and Anesthesia & Analgesia.