Since the introduction of percutaneous transluminal coronary angioplasty (PTCA) by Gruntzig in 1977, major advancements have been made in the clinical practice of percutaneous coronary intervention (PCI). Puel and Sigwart, in 1986, deployed the first coronary stent to act as a scaffold, thus 1) preventing vessel closure during PTCA, and 2) reducing the incidence of angiographic restenosis, which had an occurrence rate of 30-40%.1 By 1999, stenting composed 84.2% of all PCIs.1 Despite the widespread use of these devices, bare metal stents (BMS) have been associated with a 20-30% restenosis rate requiring reintervention.2,3 Restenosis occurs as a result of neointimal hyperplasia—growth of scar tissue within the stent—due to the proliferation and migration of vascular smooth muscle cells. This phenomenon is clinically evident within the first 6-9 months after stent placement, and occurs in response to strut-associated injury and inflammation.2

In addition to restenosis, PTCA and BMS implantation cause exaggerated endothelial injury and inflammation, rendering both the stent and vessel highly thrombogenic.4,5 A fibrinogen layer covers the stent surface, further inducing platelet activation and thrombosis. Adjunctive anti-platelet medication is crucial in preventing local coronary thrombosis, myocardial infarction (MI), and death.5 Current recommendations for patients with BMS include dual anti-platelet therapy with aspirin and clopidogrel, which are continued for 6 weeks to allow complete endothelialization of BMS.6 Wilson et al. in 2002 reported similar findings in patients who underwent noncardiac surgery.7 The incidence of MI and death were significantly lower among patients who underwent surgery after their 6-week course of aspirin and clopidogrel were completed. 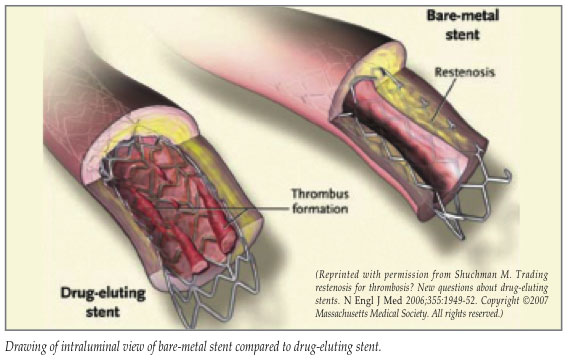 In 2001, drug-eluting stents (DES) were introduced as a strategy to minimize restenosis and requirement for reintervention. The currently available polymer-coated stents contain antiproliferative agents which elute locally in the implanted coronary artery to prevent neointimal hyperplasia. Initial animal studies demonstrated a clear benefit over BMS (4-6% restenosis versus 20-30%), and early clinical trials further supported this.2,8 In addition, at 2-year follow-up using both angiography and ultrasound, the clinical safety of DES was further established with minimal late lumen loss observed.9 A recent pooled analysis demonstrated a 74% reduction in the risk of target lesion revascularization for both sirolimus-eluting stents (SES) and paclitaxel-eluting stents (PES) compared to BMS.10 At present, 90% of all stents placed in the United States and Europe are DES.

Despite the enthusiasm that resulted with the advent of DES, incomplete endothelialization and stent thrombosis continue to plague these devices. Initial animal studies demonstrated complete endothelialization with BMS at 28 days, whereas DES uniformly showed incomplete healing at 180 days.11 Based on early observations in both animal and human studies, it was recommended that patients with DES receive dual anti-platelet therapy with aspirin and clopidogrel for at least 3-12 months, followed by life-long aspirin therapy, depending on the stent placed and the pre-existing comorbidities which further increase the risk of stent thrombosis.12,13 Despite this regimen, late stent thrombosis (LST)—defined as occurring >30 days post-stent insertion—remains a significant complication in patients with DES. Late stent thrombosis carries a 45% mortality rate.14,15 It presents as an ST-segment elevation myocardial infarction (STEMI) or sudden death. Late stent thrombosis has been documented in both clinical and autopsy studies in patients as far as 4 years after stent insertion.14-16 Further, LST is associated with the 1) discontinuation of clopidogrel +/- aspirin, 2) stable aspirin monotherapy, or 3) a hypersensitivity reaction to the stent polymer, or to the antiproliferative agent (sirolimus vs. paclitaxel).10-15 A recently published study reported that patients with DES implanted had significantly increased rates of death when clopidogrel was discontinued at 6-, 12-, and 24-months when compared to patients who remained on this therapy at the same time intervals.16

Our Current Approach to Perioperative Patients With Stents

We collaborated with the interventional cardiologists at Wake Forest University Health Sciences to develop a strategy to best manage these patients. Our protocol includes utilizing both eptifibatide (Integrilin, a GP IIb/IIIa inhibitor) and heparin as “bridging therapy” to prevent stent thrombosis in the perioperative period. Both medications are necessary in order to 1) prevent platelet activation and adhesion (eptifibatide) and 2) prevent thrombin formation (heparin), which again causes platelet activation and clot formation. Both eptifibatide and heparin have short half-lives, necessitating these drugs to be given as intravenous infusions. Further, both drugs can be stopped 6 hours prior to surgery with complete return of platelet function and coagulation. Cooperation between anesthesiology, cardiology, and surgery are of the utmost importance. The surgeon may elect to proceed with surgery while the patient remains on clopidogrel and aspirin. Alternatively, if the surgeon feels that perioperative clopidogrel will be deleterious in terms of increased surgical bleeding, then the following protocol will be instituted:

In conclusion, DES represents the most current therapy in interventional cardiology. However, late stent thrombosis is a major problem with these devices. In fact, the FDA has recently reviewed the safety of these devices, and new recommendations regarding dual anti-platelet therapy may be forthcoming. By utilizing a combination of eptifibatide, heparin, and aspirin, the risk of stent thrombosis will be markedly reduced in the perioperative period. However, we will continue to address and modify our therapeutic approach as the dynamic nature of this subject continues to evolve. This is an important patient safety issue because of the high mortality rate if stent thrombosis occurs.

Editor’s Note: While this issue of the APSF Newsletter was in production, a pre-publication scientific advisory from the American Heart Association was released electronically. This advisory addresses the issue of premature discontinuation of antiplatelet drugs in patients with drug-eluting stents, including patients presenting for non-cardiac surgery. The Advisory will be published in the February 13, 2007 issue of Circulation.