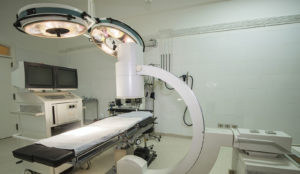 Gas embolism occurring during endoscopy procedures such as endoscopic retrograde cholangiopancreatography (ERCP), where a mucosal membrane is breached is a rare, but potentially devastating complication that can cause permanent significant neurological injuries or fatal cardiopulmonary collapse.1 Due to its rarity and lack of clinical suspicion, air embolism during gastroenterology (GI) endoscopy procedures is often unrecognized until it is too late for successful treatment.2 The difficulty in diagnosing air embolism often results in confusing the embolism with inappropriate anesthetic care, or with an acute ischemic or hemorrhagic event.1 The following case demonstrates how a sudden cardiovascular collapse during ERCP due to a suspected, undiagnosed air embolism resulted in a serious adverse event.

The anesthesia professional conducted the pre-anesthetic evaluation. He additionally noted that the patient had significant anxiety. The plan was to perform monitored anesthesia care with intravenous sedation sufficient to enable the procedure.

In the endoscopy suite, the patient was placed in the semi-prone position after electrocardiogram, blood pressure cuff, pulse oximetry, and ETCO2 monitoring were applied. She was administered 2 mg midazolam, 100 mcg fentanyl, 30 mg lidocaine, 0.2 mg glycopyrrolate and 15 mg propofol intravenously in total for her 30-minute procedure.

The endoscopy then began with insertion of the scope accompanied by insufflation of air to enable endoscopic visualization. Approximately five minutes into the procedure, the endoscopist noted difficulty identifying the major duodenal papilla and also documented “a very large peri-ampullary diverticulum” in that area. A few minutes thereafter, the patient became bradycardic and hypotensive. The patient’s blood pressure was treated twice with 10 mg ephedrine, and she was turned supine for mask/bag ventilation. Approximately five minutes later, the patient was pulseless with electrocardiogram unchanged. Cardiopulmonary resuscitation was started with chest compressions, 1 mg epinephrine was given, the patient was intubated and a pulse was immediately restored. Pulse oximeter readings throughout the case ranged from 92 to 100 percent. The procedure was terminated and the patient was taken to the Intensive Care Unit.

A neurologist consult noted chronic ischemic changes in the right parietal-occipital lobe and a chronic lacunar infarction of the cerebellum on computed tomography. Probable anoxic encephalopathy was noted on electroencephalogram. The patient never regained any neurologic function and she expired one week postoperatively.

The patient’s husband sued the anesthesia team and the hospital alleging the patient was oversedated, which caused cardiopulmonary depression, PEA arrest, and anoxic brain injury.

The plaintiff’s expert opined that the anesthetic was “excessive” and the propofol should not have been administered. He opined further that when the patient first became bradycardic and hypotensive, the certified registered nurse anesthetist (CRNA) should have called the supervising anesthesiologist, immediately intubated the patient, and administered epinephrine. He was also critical that the supervising anesthesiologist was not “carefully and continuously” monitoring the CRNA.

The defense forensic pathology expert did not identify any evidence of an anesthetic overdose. Because of the lack of an autopsy and toxicology reports, there was little evidence to determine the exact cause of death.

The defense anesthesiology expert was fully supportive of the care and treatment provided by the anesthesiologist and CRNA. He opined that appropriate doses of anesthesia were utilized in this case. The defense expert noted that the CRNA and anesthesiologist responded to the changes in the blood pressure and heart rate very rapidly. The immediate response to the epinephrine restored blood pressure and provided adequate perfusion for delivery of oxygen. The expert did not believe the documented timeline supported the theory of anoxia from oxygen deprivation. He opined that the patient’s sudden cardiovascular collapse upon being turned supine was the result of an air embolism caused by the ERCP procedure and the gastroenterologist’s difficulty finding the hepatopancreatic ampulla. The expert cited numerous cases in the medical literature supporting his causation findings.

This case was submitted to a mediation panel prior to trial. Following each side’s submission of their respective briefs and exhibits, the panel awarded the patient’s husband money damages against both the hospital on behalf of the CRNA and the anesthesiologist. All parties accepted the panel’s awards and the hospital settled for a confidential amount. With the PPM’s insured anesthesiologist’s consent, this case was settled for $10,000.

In GI endoscopy cases, venous gas embolism (VGE) is caused by gas bubbles, under pressure, entering the vasculature allowing the passage of gas into the systemic circulation.3 VGE, including intracardiac and intracerebral air embolism, is highly lethal with a mortality rate of up to 21%, according to a recent study.4

Different mechanisms causing gas entry into the venous system have been proposed: invasive procedures (e.g., sphincterotomy, biliary stent), exposure to high gas insufflation pressure, intramural dissection by the gas, and biliary-hepato-venous fistula. Other identified risk factors for VGE include previous procedures of the bile duct system, abdominal trauma, metal stent placement, and digestive system inflammation.5 In a series of over 800 patients reported on by Afreen et al., the incidence of VGE as documented by precordial Doppler ultrasound was 2.4% (20/843 patients) of which 10 had significant hemodynamic alterations. In addition, stent removal combined with stent replacement revealed a 4.4% incidence of VGE, while cases during cholangioscopy had a 9.1% incidence.6

Unexpected cardiovascular events in the GI endoscopy suite, during or at the end of an endoscopy procedure where a mucosal or vascular barrier may be or had been breached should alert clinicians to consider gas embolism.