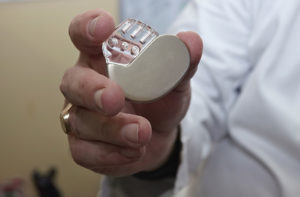 Cardiovascular implantable electronic device (CIED) is a general term for pacemakers, implantable cardioverter defibrillators (ICDs), and cardiac resynchronization therapy (CRT) devices. The goal of the APSF article from 2013 “Managing CIEDs during Perioperative Care” was to provide anesthesia professionals a general framework for managing patients with CIEDs in the perioperative period.1 The 2011 Heart Rhythm Society (HRS)/American Society of Anesthesiologists (ASA) consensus statement2 on which the APSF article was based, was a pivotal manuscript that demystified many confusing aspects of perioperative care of CIEDs. These issues are summarized below:

From a preoperative standpoint, many patients with CIEDs do not need a new evaluation prior to surgery. Patients with pacemakers necessitate yearly evaluations, and patients with ICDs or CRT devices require interrogations every 6 months.2 The preoperative assessment of CIEDs is primarily focused on communication between the anesthesia professional, the surgeon, and the CIED team (cardiologist, nurse practitioners, and/or manufacturer representative). It is important for all members of the team to understand the patient and surgical factors that are necessary so as to create an individualized approach for each patient. Critical information for the anesthesia professional includes date of last interrogation, device type, indication for device placement, battery longevity, current programming, pacemaker dependence, and magnet response (see Table 1 from original article—https://dev2.apsf.org/article/managing-cardiovascular-implantable-electronic-devices-cieds-during-perioperative-care/).1

The CIED plan must include an assessment of electromagnetic interference (EMI). While there are several causes of EMI, the most common cause in the operating room is monopolar electrocautery.1 If the EMI is within 6 inches of the pulse generator, it can inhibit pacing and/or cause inappropriate tachycardia therapy depending on the type of CIED. Damage to the pulse generator is rare, though possible. While CIEDs have algorithms for minimizing inappropriate sensing and pacing, EMI can still cause oversensing. Pacemaker oversensing will cause a pacemaker to interpret EMI as intrinsic cardiac activity, preventing delivery of pacing stimuli in a pacemaker-dependent patient. ICD oversensing will cause EMI to be interpreted as a tachyarrhythmia, and it may lead to inappropriate defibrillation. For surgery below the umbilicus, the HRS/ASA consensus document recommends that there is minimal need to reprogram a CIED or place a magnet because the risk of oversensing is small as long as the grounding pad is appropriately positioned. To minimize the risk of electromagnetic interference, the dispersive electrode (grounding pad) should be positioned so the current pathway does not pass through or near the cardiac implantable electronic device generator or leads.

Magnets are commonly used by many practitioners in the intraoperative environment due to ease of application; however, the CIED response to a magnet is varied depending on the type of the device, the age of the battery, and the way the device was programmed. In addition, placing a magnet may place the patient into an asynchronous mode, but the rate may not meet the physiologic demands of the patient. An important caveat is that while magnet application to an ICD will turn off the tachyarrhythmia functions, it will not have any effect on the pacemaker. It is important for the anesthesia team members to confirm the magnet effect on each patient’s CIED.

The 2013 APSF article by Neelankavil et al. outlined an algorithm for the perioperative management of patients with CIEDs undergoing elective and emergent surgeries.1 The algorithm for elective surgery focused on risk of EMI to the device, made the distinction between pacemakers and ICD, and suggested a different management approach based on pacemaker dependence (see Figure 1 from original article—https://dev2.apsf.org/article/managing-cardiovascular-implantable-electronic-devices-cieds-during-perioperative-care/).

CIED technology has evolved since the original article, but many of the previously suggested perioperative approaches remain relevant today. The management of CIEDs continues to be a common clinical scenario for anesthesia professionals, especially since the prevalence of these devices in the population has increased. One study examining pacemaker implantation in the United States from 1993–2009 demonstrated an increase in utilization by 55%.3 National ICD registries have identified over 1.7 million devices placed in the United States alone.4

Are we too concerned about CIED management in the perioperative settings? Has technology improved so much since the last APSF article that anesthesia professionals should not worry about perioperative CIED care? A clinically relevant study by Schulman et al. concluded that EMI still poses a significant risk to patients with CIEDs undergoing surgery with EMI. Their prospective study placed ICDs in a “monitor mode” for patients undergoing a variety of surgeries.

Monopolar electrocautery resulted in clinically important EMI (EMI that would have caused inappropriate antitachycardia pacing or defibrillation by an ICD had the device not been reprogrammed) in 20% of patients during noncardiac surgery above the umbilicus, in 29% of patients during cardiac surgery, and in 0% of patients if surgery was below the umbilicus. The study used protocolized electrosurgery dispersive electrode positioning as recommended by the ASA and HRS.5 The strength of the study identifies the importance of an individualized care plan for CIED patients based on the type of cardiac device as well as CIED position and location of surgery because the risk of clinically significant EMI is real even with improved contemporary CIED technology.

Since the 2013 article,1 newer types of pacemakers and ICDs have been FDA-approved and are being used clinically. These devices have specific CIED perioperative considerations for anesthesia professionals. The Medronic Micra™ is a leadless pacemaker approved for use in the United States. The Micra is a self-contained generator and electrode single chamber device placed in the right ventricle via the femoral vein. Its modes include VVIR (ventricular pacing, ventricular sensing, pacing inhibition in response to sensed event, rate modulation), VVI, VOO (asynchronous ventricular pacing), and OVO (ventricular sensing only), and there is no defibrillation capacity. The advantage of leadless pacemakers is the elimination of major and at times devastating complications associated with transvenous leads: pocket infections/hematomas, intravascular lead infections, vascular thrombosis, lead dislodgment, and lead fracture. These devices do not have a magnet sensor and thus will not respond to a magnet as they are of very small size. It is recommended that these devices be reprogrammed to VOO mode to reduce oversensing when EMI is anticipated.6

The subcutaneous ICD (S-ICD) manufactured by Boston Scientific is another newer type of ICD encountered in clinical practice. It is used for patients at risk for ventricular arrhythmias who do not need bradyarryhthmia or antitachycardia pacing.7 Although this device is not able to provide long-term pacing, it is capable of pacing at 50 pulses per minute for 30 seconds after a defibrillator shock, should the patient become profoundly bradycardic post-treatment.8 The S-ICD consists of a pulse generator and a single subcutaneous lead. Both the pulse generator and the lead are implanted in the subcutaneous tissue and are extra thoracic.9 The pulse generator is usually implanted between the anterior and mid-axillary lines at the level of the 6th intercostal space. The lead is then tunneled medially from the pulse generator pocket to the xiphoid process and then superiorly along the left parasternal border. Like the Micra, an advantage of the S-ICD is lack of transvenous leads. The S-ICD has the same response to a magnet as a traditional ICD. Magnet application over the pulse generator will turn off the antiarrhythmic features of the device and removing the magnet will revert the device to its prior programmed state. A feature the S-ICD has that ensures the magnet is properly positioned is a “beeping” sound which indicates that arrhythmia detection and shock therapy have been suspended. If the beep is not heard with magnet application, it is recommended that the magnet be repositioned over the device until a beep is elicited. It may be difficult to keep the magnet over the generator; reprogramming the device may be more practical depending on the type of surgery and patient position.

The ASA recently published an updated practice advisory for the perioperative management of CIEDs in 2020.10 The document emphasizes similar tenets of the 2011 ASA/HRS consensus statement including the importance of the preoperative evaluation and the importance of determining the risk from EMI. There are several new suggestions contained in the practice advisory that offer clarity in specific clinical situations. The document addresses what to do if emergency cardioversion or defibrillation are needed in a patient with a CIED. In this situation the advisory recommends termination of all EMI, removal of a magnet (if applied), and observation of the patient for appropriate antitachycardia therapy from the CIED. If the CIED was programmed to turn off antitachycardia therapy, determine the need to reprogram the device. If removing the magnet does not restore the CIED antitachycardia therapy or if the device cannot be programmed quickly, proceed with emergency external cardioversion or defibrillation. The new practice advisory also addresses the increasing use of MRI conditional CIEDs and the perioperative management of these devices. The advisory specifically discourages the “indiscriminate” application of magnets to CIEDs, which is consistent with the 2011 HRS/ASA statement recommending that magnet response be known for a patient’s CIED prior to applying a magnet.

Technology has changed since the original 2013 APSF article; however, the basic principles outlined by this important article are still relevant today. EMI and oversensing of CIEDs in certain patients continues to be a clinical problem for anesthesia professionals. With the advent of new pacemakers and ICDs, anesthesia professionals will continue to see a myriad of devices, and we have the ability to create thoughtful individualized plans for all patients with CIEDs.

Aman Mahajan MD, PhD, MBA is the Peter and Eva Safar professor and chair in the Department of Anesthesiology and Perioperative Medicine and professor of Biomedical Informatics and Bioengineering, and Executive Director, UPMC Perioperative and Surgical Services, University of Pittsburgh and UPMC