Optimal skin preparation and aseptic technique are imperative during insertion of central venous (CVP) and other invasive catheters to minimize the risk of catheter-related bloodstream infections (CRBSI), a major cause of morbidity, mortality, and increased health care costs. A generation of practitioners have grown up using Betadine® or similar 10% povidone-iodine products for skin preparation during catheter insertion. However, most experts, as well as the Centers for Disease Control (CDC) and Prevention, now preferentially recommend use of chlorhexidine gluconate-based preparations in place of either 10% povidone-iodine or 70% alcohol. These recommendations were published in August 2002 in “Guidelines for the Prevention of Intravascular Catheter-Related Infections” by the CDC.1 Chlorhexidine-based commercial applicators are now widely available (see photo) since the U.S. Food and Drug Administration (FDA) approved a 2% tincture of chlorhexidine preparation for skin antisepsis in July 2000. 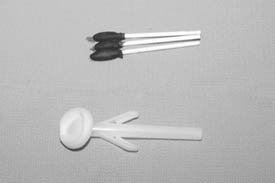 Significant evidence supports this change. Maki et al. randomized skin preparation solution for 668 catheters comparing 2% chlorhexidine, 10% povidone-iodine, and 70% alcohol. Chlorhexidine was associated with the lowest incidence of CRBSI (2.3 per 100 catheters, p=0.02). Alcohol and povidone-iodine were associated with 7.1 and 9.3 infections per 100 catheters.2 In a recent meta-analysis, Chaiyakunapruk analyzed 8 studies involving a total of 4,143 catheters.3 This summary identified a risk reduction for CRBSI = 0.49, 95% confidence interval (0.28 – 0.88). Chlorhexidine gluconate decreased CRBSI by 50% compared with povidone-iodine (1% vs. 2%). Despite the greater cost of chlorhexidine compared to that of povidone-iodine, the meta-analysis suggests chlorhexidine is cost effective and perhaps even cost saving. However, formal medical economic evaluation is not yet complete.

Two unique aspects of chlorhexidine utilization are noteworthy. Practitioners must be aware that 2% chlorhexidine skin preparation is colorless, and there have been anecdotal reports of confusion as to the width of the prepared sterile field, or indeed, even whether the skin was “prepped” at all!

Dr. Wagner is an ICU Fellow and Dr. Prielipp is Professor and Section Head of Critical Care Medicine in the Department of Anesthesiology at Wake Forest University School of Medicine in Winston-Salem, NC.