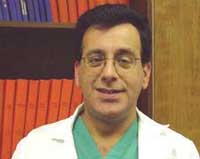 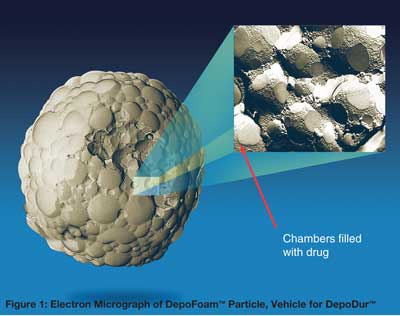 Recently published studies have demonstrated the safety and efficacy of DepoDur™ in a variety of surgical models. In a hip arthroplasty study, DepoDur™ provided analgesia for up to 48 hours after surgery with a side effect profile similar to standard epidural opioid analgesia.1 Patients rated their pain control with DepoDur™ as superior compared with intravenous patient controlled analgesia with fentanyl (Figure 2). Patients who received any dose of DepoDur™ had a marked reduction in their need for supplemental analgesia (Figure 3) and delayed the time for first analgesic rescue. No additional analgesia was needed in 25% of patients. Similarly, in the lower abdominal surgery study, patients who received DepoDur™ needed less supplemental opioid analgesia and had significantly reduced pain scores.2 Fewer DepoDur™ patients required supplemental analgesia. 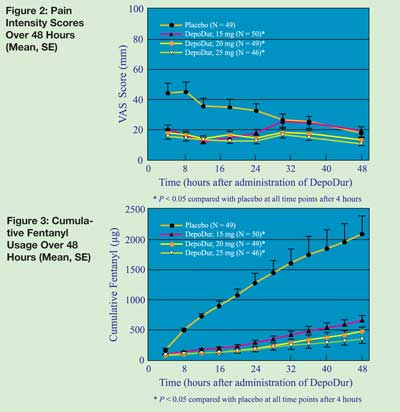 In a study with cesarean sections, DepoDur™ was compared to a standard epidural morphine dose of 5 mg.3 Patients who received DepoDur™ at the 10 and 15 mg dose had both superior pain relief and extended analgesia for 48 hours with less need for supplemental analgesia. In order to measure functionality of patients, a measurement instrument was created to assess the impact of pain on common patient functions (resting in bed, sitting, waking, and using the rest room). Pain had significantly less impact on functional ability for 48 hours after surgery in patients who received DepoDur™ at the 10 or 15 mg dose.

The overall side effect profile from the above studies was consistent with the postoperative populations studied and with side effects of neuraxially administered opioids in general. For example, pruritus, nausea, vomiting, and decreased oxygenation occurred in greater than 10% of patients. Overall, up to 4% of patients received naloxone for respiratory depression. At approved doses, all incidents of respiratory depression requiring naloxone administration occurred by 16 hours. There were no surprising adverse events.

The potential of providing extended analgesia without an epidural catheter and epidural pump or IV-PCA pump is very desirable. External pump technology is cumbersome for the patient, time consuming for the nursing staff, and is associated with medication errors and pump programming errors. In many surgical settings, anticoagulation to prevent venous thromboembolis is now standard care. Consequently, indwelling epidural catheters may increase the risk of epidural hematoma formation. DepoDur™ may provide extended analgesia without the need for indwelling epidural catheters and without the difficulties associated with current epidural and IV-PCA pumps.

These studies along with the information contained in the package insert4 provide some guidance for clinicians introducing DepoDur™ into their clinical practice. Approved DepoDur™ doses are 10 mg for cesarean section, 15 mg for major lower extremity orthopedic surgery, and 10 to 15 mg for lower abdominal and pelvic surgery. Other than cesarean section, some patients may benefit from 20 mg, but clinicians must remember that the incidence of respiratory side effects is dose dependent. One must bear in mind that these doses are based on studies employing opioids alone for analgesia. In practice, most clinicians utilize multimodal analgesic techniques to reduce opioid requirements and their related side effects while optimizing pain relief. If clinicians use similar techniques with DepoDur™, it is quite likely that lower doses may provide adequate analgesia while reducing typical opioid side effects such as nausea, pruritus, and respiratory depression. Also, clinicians may want to consider starting at lower doses while they gain experience with a new drug therapy.

Clinicians must bear in mind that the chief hazard of opioids including DepoDur™ is respiratory depression. This risk is heightened in the elderly, debilitated, and those with underlying respiratory issues. Opioid dose adjustment may therefore be warranted. Hence, clinicians should maintain a high level of vigilance in these populations. Patients receiving opioids require monitoring. If the analgesic efficacy of DepoDur™ lasts for 48 hours, it is reasonable to assume that monitoring for safety is needed over this period. This requires patients to remain in a hospital setting for at least 48 hours.

Concomitant Use of Local Anesthetics

DepoDur™ is not indicated for use after a conventional local anesthetic epidural. There should be at least a 15-minute waiting period after a standard 3 ml epidural test dose of lidocaine with epinephrine. In studies of drug interactions with DepoDur™ local anesthetics increased the release of morphine from the carrier. Currently, DepoDur™ cannot be given following a true epidural with local anesthetics since the effect on morphine release is unknown. Investigations of this interaction are underway and an answer may be forthcoming. Similarly, no other drug should be placed in the epidural space within 48 hours of DepoDur™ administration because the effect on the release profile of morphine from the carrier (DepoFoam) is unknown.

Patients receiving parenteral opioids require observation for respiratory depression. The current monitoring practice for epidural and intrathecal analgesia offers some guidance. Most clinicians have experience with these modalities, and most hospitals have established protocols for monitoring these patients. However, there are no universally accepted standards or published guidelines for respiratory monitoring with opioid therapies by any accreditation body or society. In addition, there is no clear consensus in the literature.

A recent survey of 1,047 anesthesiologists revealed a wide range of monitoring practice with epidural analgesia.6 Half of the respondents reported monitoring by direct observation, but without pulse oxymetry at intermittent intervals. Of these, 30% reported hourly monitoring, 36% at 2-hour intervals, and 34% at 4-hour intervals. Continuous pulse oxymetry was reported by approximately 30% while regular but intermittent use was reported by 15% (5% responded “other”). Clearly, there is a wide range of opinion as to what is appropriate monitoring for these patients. No defined “standard of care” currently exists. Monitoring protocols for epidural analgesia and possibly other analgesic techniques might benefit from an evidence-based approach.

There is clearly a move toward increased concern in treating postoperative pain. The JCAHO pain management standards provided impetus for hospitals to review their pain management practices. Although patients have clearly had the benefit of increased pain awareness, the more aggressive use of analgesics, particularly opioids, has inherent potential risk. Fortunately, opioid-induced respiratory depression is easily managed, when it is recognized. Consequently, a careful review of current practices and adverse events is warranted.

Extended analgesia without an indwelling epidural catheter or external IV-PCA pump may offer distinct benefits for clinician and patient. Further outcome studies will be needed to quantify the potential for easier patient mobility and less burden of care associated with new technologies. As clinicians introduce new modalities, they must assess the risk-benefit ratio for their particular practice and hospital setting. Crafting appropriate protocols and monitoring practices will improve the safety while offering patients the benefits of newer therapies.

Dr. Viscusi is the Director of the Acute Pain Management Service at the Thomas Jefferson University in Philadelphia, PA.

Disclosure:
Dr. Viscusi has received investigative grant support from and has been compensated as a scientific advisor by Endo Pharmaceuticals, manufacturer of Depodur™. He owns no stock in this company, nor does he receive a salary from Endo Pharmaceuticals.