It was a “standard” interscalene block for shoulder surgery, a single injection of a ropivacaine/tetracaine mixture under ultrasound guidance. But then the convulsion started; the patient lost consciousness and stopped breathing. The blood pressure dropped, but sinus rhythm was maintained. The anesthesiologist reported: “I sort of froze: Four people were doing a lot of things at once, it was chaotic, but I remembered to get the checklist.” The checklist he remembered was the ASRA guideline for managing local anesthetic toxicity (LAST) that he had just simulated at a meeting, and which was now posted on the operating room wall. The checklist was read out loud; administration of a large dose of propofol (drawn up and being connected to the IV) was immediately stopped and Intralipid™ given instead in the correct dose. After following the steps on the list, the patient awakened with no permanent complications, and received surgery at a later date.

This is the story shared by Paul Preston, MD, of the Kaiser Hospital system in Northern California. He added that “using the checklist really helped the team get organized and more effectively do the correct steps. It greatly added to situational awareness. Nobody could remember the exact dose of Intralipid even though two of the providers had been through LAST simulation a month earlier—this let the team rapidly get it right.”

The reality is that none of us can any longer function as that “lone expert” recalling every procedure and drug dose from memory, especially in crisis situations. The American Heart Association has developed algorithms for managing cardiac arrest, the MHAUS association has a detailed checklist for managing malignant hyperthermia (www.mhaus.org), the Central Line Bundle is now used to prevent infections in the ICU, and ASRA has shared the LAST checklist.1 We are now adapting to the checklist concept that has been used in aviation for 80 years, and for anesthesia machine checks for 50. We have seen that effective use of the WHO surgical checklist in the operating room reduces morbidity and mortality. The Stanford Patient Simulation Center has an extensive history of developing and testing cognitive aids for operating room teams through simulation.2 This concept has also been explored by researchers at Ariadne Labs, a joint center for health system innovation at Brigham and Women’s Hospital and Harvard School of Public Health, to introduce a broad set of 12 Crisis Management checklists for the operating room (Figure 2).3 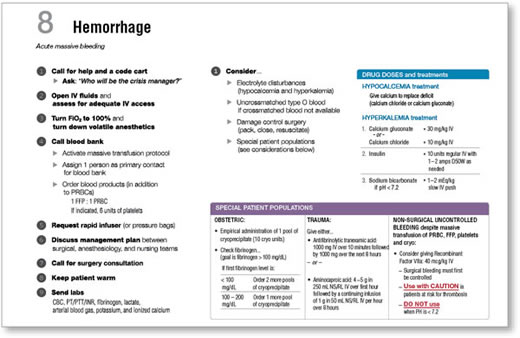 Simulation testing of such cognitive aids in Palo Alto , Boston,3 and Seattle1 has shown, not surprisingly, that performance in emergency situations is greatly improved with a checklist. The use of these tools in teaching new residents how to manage emergency situations has also been demonstrated at Northwestern University.5 Distribution of emergency manuals in the VA Hospital system has resulted in anecdotal reports of efficacy in real time crisis situations.6

While every hospital needs an Emergency Manual that meets their specific needs (including the phone number for fire reporting, the location of the MH kit, etc.), there are several sets of cognitive aids available as potential templates. The Stanford published handbook of checklists7 is now supplemented by a website with a set of 23 anesthesia cognitive aids (http://emergencymanual.stanford.edu) (Figure 3) and a second website with additional protocols (www.cognitive aids.org). Another manual of Crisis Checklists for the Anaesthetist8 is available, but uses more British standards for cardiac emergencies—a North American version may be coming in the future. The LAST guidelines are available from www.asra.com. The 12 checklists developed and tested by researchers at Ariadne Labs are also available at www.projectcheck.org/crisis, which includes a 4-page discussion describing practical ways to adapt and distribute these in operating rooms and a discussion of modifications that may be needed. 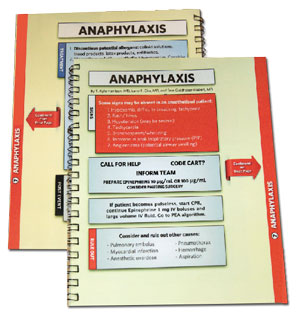 But it is not just a matter of buying some books or distributing a set of three ring binders. Experience with the WHO surgical checklist shows just tacking a checklist on the wall doesn’t create effective use or team behaviors. Lists must be modified for local use; even the ACLS guidelines aren’t always suited to the operating room.9 Institutional support and education is needed, as well as inclusion of all of the staff who might be affected, including surgeons, nurses, and anesthesia technicians. A local “champion” is the best way to ensure broad implementation. There are at least 4 stages:

This latter concept highlights the need for all members of the team to move away from the traditional reliance on memory and towards the acceptance of cognitive aids, as well as a shift from the cultural expectation of individual perfection, concepts that will likely require several years in a medical system that currently teaches and grades individual responsibility and independent action. Several simulations have shown reluctance of current trainees to use cognitive aids, even when made available.1

Crisis checklists will not be used if the potential users are unaware of them and untrained. Neily and colleagues at the VA found that, despite the positive response to the concept by 98 % of staff, 13% and 41% in 2 surveys admitted they were not even aware of the tools.5 Awareness alone is also not enough—practice is critical. Burden and colleagues found in their simulation trials that a designated “reader” was essential for the more complex scenarios, such as malignant hyperthermia.10 The ASRA group discovered in their initial simulation that the first guideline was ambiguous and had to be revised to be effective.1 Using the crisis checklists as templates for multidisciplinary simulation is the ideal way to ensure that the steps are clear, and that all members of the operating team are really prepared to handle emergencies—the Stanford group has been constantly revising their lists based on simulation experience.

Many of these ideas were broached at a collaborative discussion on crisis checklist implementation at the ASA meeting in Washington, DC, in October 2012, and will be refined at a follow-up session in San Francisco. The discussions in DC led to development of an Emergency Manual Implementation Collaborative (EMIC) this spring, which is dedicated to fostering the implementation of crisis checklists in the operating room. The group has established a website for exchange of ideas (www.emergencymanuals.org). If you have a set of Emergency Checklists or Cognitive Aids, or whatever you call them, please share your experiences on this site. Your participation is welcome, especially if you have familiarities with implementation that can ease the path for others, or give good reasons to make it happen.

Although everyone accepts the concept, effective implementation of emergency manuals will not happen automatically, partly because of the rare frequency of such events, but also because of our cultural heritage of independence. It took the airlines many years to arrive at their current state of high reliability, achieved by their emphasis on frequent simulation, adaptation of team training, and heavy use of checklists. We have equal challenges, but hopefully can use their experience to help us make the transition rapidly.

Members of the Emergency Manual Implementation Collaborative include