Methylene blue is administered intravenously by anesthesia providers for a variety of clinical uses and may be used with increasing frequency as an intraoperative urologic marker dye due to an indefinite nationwide shortage of indigo carmine. It is a potent monoamine oxidase (MAO) inhibitor, and in combination with other serotonergic agents such as selective serotonin reuptake inhibitors (SSRIs), MB can produce serotonin toxicity in the perioperative period.1,2

Methylene blue (methylthioninium chloride) is structurally related to tricyclic antidepressants and acts on monoamine oxidase (MAO), especially MAO-A, as well as on the nitric oxide (NO)-cyclic GMP pathway. In addition to its use as a marker dye, it is used in clinical practice for the treatment of hypotensive shock/vasoplegic syndrome, ifosfamide-induced encephalopathy, and methemoglobinemia.2 Methylene blue has also been used as an infusion to localize parathyroid tissue during parathyroidectomy. In fact, the earliest reports of postoperative neurologic complications associated with the administration of methylene blue were during the perioperative period of elective parathyroidectomies. It is rapidly absorbed in nervous tissue and reaches high concentrations in brain tissue in rat models.2 Administration of methylene blue in isolation is not thought to confer any significant risk of serotonin toxicity.3 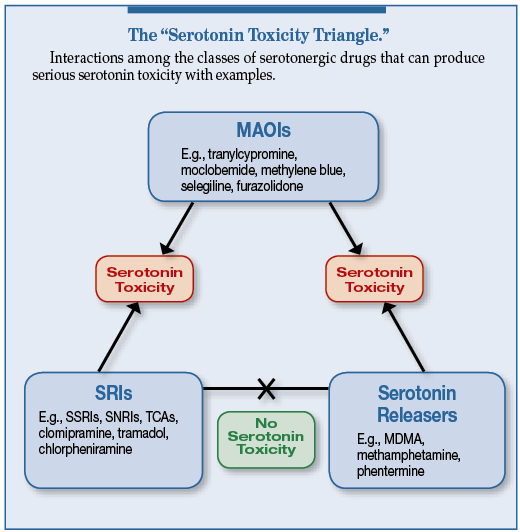 Marker dyes such as indigo carmine are commonly used in surgical procedures to confirm ureteral patency and to localize ureteral orifices, for lymph node and vessel delineation, and for tumor localization. Beyond an occasional idiosyncratic drug reaction or mild pressor effect, the intravenous administration of indigo carmine is generally well tolerated. Unfortunately, indigo carmine is not currently available from either of its 2 manufacturers, producing a nationwide shortage. American Regent, Inc., (Shirley, New York) has placed indigo carmine on back order due to manufacturing delays, and Akorn Pharmaceuticals (Lake Forest, IL) has discontinued its production indefinitely due to shortage of raw material.4 At the author’s institution, methylene blue has become the most common choice as an alternative indicator dye. Methylene blue, unlike indigo carmine, is a potent MAO inhibitor and when combined with a variety of medications with serotonergic activity, may contribute to serious sequelae secondary to serotonin toxicity. Specific commonly encountered serotonergic medications include SSRIs like fluoxetine, paroxetine, and escitalopram, serotonin-norepinephrine reuptake inhibitors (SNRIs) like venlafaxine and duloxetine, and tricyclic antidepressants (TCAs) (e.g.,amitriptyline and clomipramine).5 Even weak serotonin reuptake inhibitors such as intravenous fentanyl, transdermal fentanyl patch, meperidine, tramadol, and methadone have been associated with serotonin toxicity in combination with either methylene blue and / or other serotonergic medications.7, 8 A more complete list of serotonergic medications can be found on the FDA website.5 Careful consideration of the concurrent use of these medications in the perioperative period is warranted.

Methylene blue has been used clinically for over a century, but its association with serotonin toxicity has just been elucidated in the last decade. Two surgical case series from 2006 and 2007 describe methylene-blue associated CNS toxicity in patients receiving intraoperative methylene blue. While all patients taking an SRI did not develop CNS toxicity, all of the cases of toxicity involved patients that were taking SRIs. Additionally, there are now at least 14 individual published case reports of probable or definite serotonin toxicity involving the concurrent use of serotonin reuptake inhibitors and methylene blue, 1 of which was fatal.1 A pattern in several early case reports of the serotonin toxidrome occurring with methylene blue administration prompted in vitro studies by Gillman and Ramsay in 2006, which were the first to demonstrate MB’s highly potent reversible MAO-A inhibitor activity at nanomolar concentrations. Further study has revealed that due to its high potency, even low doses (less than 1 mg/kg) are likely to produce clinically significant MAO inhibition.2 In July 2011, after receiving reports of serious perioperative adverse events, the FDA issued a safety announcement highlighting the risk of central nervous system dysfunction when administering methylene blue to patients taking serotonergic psychiatric medications.5

Because serotonin toxicity represents a spectrum of severity depending on the ability of a drug or combination of drugs to raise serotonin levels, different medications may have more risk of producing serotonin toxicity than others depending on the degree of serotonin augmentation that they produce. Drugs within the same class may have varying effects on serotonin. For example, tricyclic antidepressants (TCAs) cause serotonin reuptake inhibition as well as norepinephrine reuptake inhibition. The degree and selectivity of inhibition of the serotonin versus norepinephrine transport differs among TCAs with clomipramine being most potent at serotonin reuptake while desipramine has little serotonin activity.10 Other antidepressants such as mirtazapine and trazodone also have low serotonergic activity.1 Nevertheless, the FDA has extended the warning to all serotonergic drugs and suggests that they be discontinued with anticipated methylene blue dosing until further information is available.

In the presence of a serotonergic agent, serotonin toxicity is established at a high confidence level if any one of the 5 conditions below are present:

Serotonin toxicity is a potentially lethal condition that manifests with mental status changes, autonomic hyperactivity, and neuromuscular abnormalities. Clinical signs may include tremor, nervousness, agitation, mydriasis, mood dysphoria, hyperreflexia, and inducible clonus. In its most severe form, confusion, muscle rigidity, sustained clonus, and hyperthermia with temperatures greater than 38.5°C may be present. Signs of serotonin toxicity can be mistaken for other conditions in the setting of a recent anesthetic. Benzodiazepines and muscle relaxants may also mask symptoms. Agitation and mood disturbance may be interpreted as postoperative delirium and elevated temperature may raise the suspicion of malignant hyperthermia. Other conditions with overlapping symptoms include anticholinergic crisis, neuroleptic malignant syndrome, acute alcohol withdrawal, and metabolite-mediated opiate toxicity. The combination of a SRI or other serotonergic agent with methylene blue should prompt a high degree of suspicion for serotonin toxicity. The Hunter serotonin toxicity scale is useful to confirm a diagnosis so that immediate treatment may be initiated (Table 1).

Discontinuing a psychiatric medication may not be feasible for some patients, so deciding on an alternative intraoperative marker agent may be warranted, if there are any available for a given surgical procedure. There are reports of indocyanine green being used to identify ureters using near infrared light.4 Oral phenazopyridine and vitamin B complex may also be considered for preoperative administration. If methylene blue use is being considered, it is advisable to discontinue the SRI to allow clearance of the active ingredient and its active metabolites, with a recommended washout period of approximately 2 weeks for most serotonergic psychiatric drugs. Fluoxetine (Prozac) and its major active metabolite have exceptionally long half-lives and should be discontinued at least 5 weeks prior to the administration of methylene blue. Individual package inserts can provide guidance for discontinuation of these medications in this setting.11 Many serotonergic medications are extensively metabolized by the liver, so prolonged clearance should be expected in the case of impairment of hepatic metabolism.12 Methylene blue administration, in the setting of concomitant SRI use, may be considered for life-threatening indications such as vasoplegia with cardiopulmonary bypass, methemoglobinemia, ifosfamide-induced encephalopathy and cyanide poisoning. If the benefit is deemed to outweigh the risk and methylene blue is given, the patient should be monitored for symptoms of CNS toxicity for 24 hours after the last dose of methylene blue.4

In summary, the administration of methylene blue in patients taking serotonergic medications, especially SSRIs and SNRIs, may produce serotonin toxicity. With a shortage of indigo carmine, methylene blue may be administered with more frequency especially for urologic procedures. Anesthesia providers should be cognizant of this drug-drug interaction and associated sequelae.