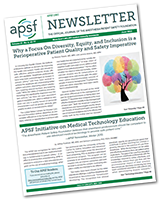 Instruments intended to non-invasively measure the oxygen saturation of arterial blood were introduced as early as 1942.1 Very rarely their potential value as a monitor in anesthetized patients was evaluated, as for example during pediatric tonsillectomy in Montreal in 1951.2 A similar instrument was also used in Toronto to monitor anesthetized infants during the 1950’s in the earliest days of cardiac surgery.3

However, as late as 1982, in North America, the hemoglobin oxygen saturation of patients during anesthesia was virtually never routinely monitored. Trans-cutaneous oxygen tension tcpO2 monitors were developed and marketed in 1976 and soon were in use in neonatal intensive care units. However, these were generally unsatisfactory for use during anesthesia. Their accuracy was compromised by anesthesia induced changes in cutaneous blood flow and also by the direct effect of volatile agents on the sensor.4

The Hewlett-Packard Company marketed an ear oximeter in 1976. This was cumbersome to apply and was never widely adopted*. Its performance during anesthesia in healthy volunteers was reasonably accurate, but the reliability during anesthesia induced circulatory disturbances was uncertain.5

There was obviously interest amongst anesthesiologists in the possibility of monitoring arterial oxygenation, but there was as yet no simple easy way to reliably accomplish this.

In early 1982, when I was serving as the Head of the Department of Anesthesia at the Hospital for Sick Children in Toronto (HSC), then the largest academic pediatric service in North America, I had a visit from Dr. William New. He brought with him a prototype of a pulse oximeter (See illustration). This machine needed no calibration and was very easy to apply to the patient using a flexible adhesive disposable sensor, or a reusable clip-on sensor. He asked if we would be prepared to evaluate this machine on some of our patients. 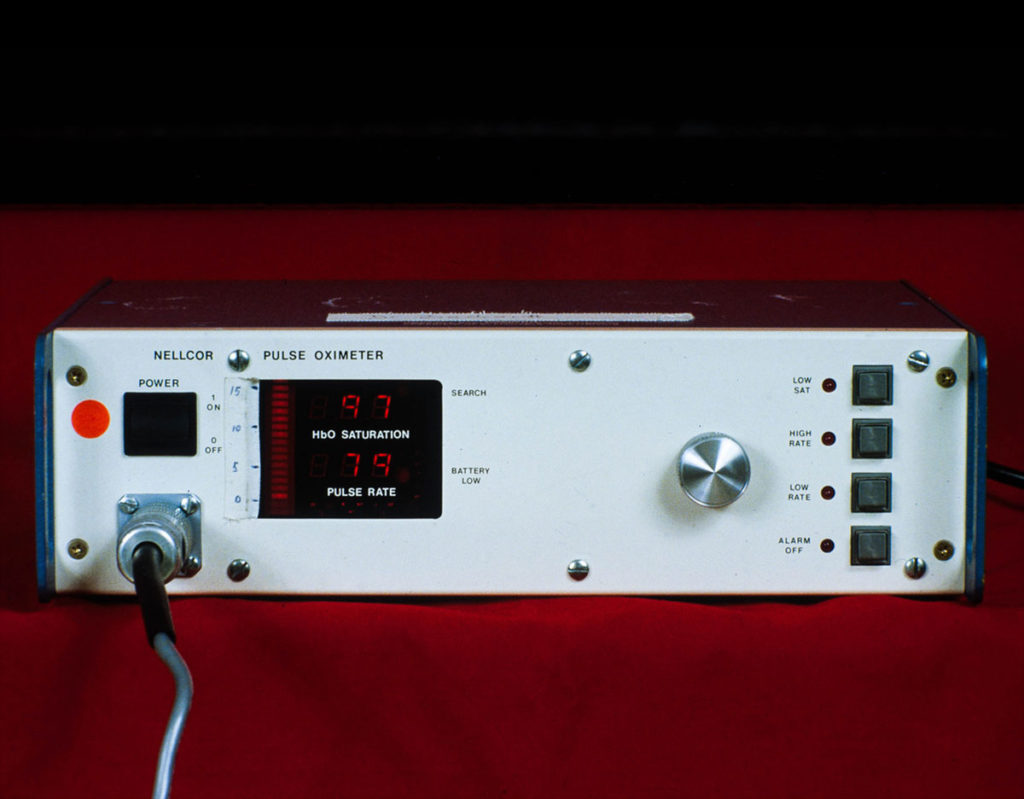 Nellcor Pulse Oximeter Prototype as delivered to us in 1982.
Note the absence of the “N-100” designation, this was added at a later date as N-100A. The first commercial model was called N-100B.

At that time (1982), I understood that Dr. New had been an anesthesiologist at Stanford University and that previously he had been a graduate electrical engineer at Hewlett Packard. He had now become an entrepreneur and was forming a company to produce and market this oximeter. He had a PhD in physiology from UCLA (1963) and an MS in business from Stanford (1981).

We agreed to conduct a study and I assigned a postgraduate fellow, Dr. Rainer Deckhard to this project. We studied the performance of the prototype in a series of cardiac surgical patients between 6 months and 9 years of age and found good correlation with co-oximeter readings on withdrawn blood samples. We also studied its performance in a series of preterm infants in the NICU who were also being monitored by a tcPO2 monitor. Thus, we compared the 2 methods of monitoring directly. We reported our findings in 1984 in Critical Care Medicine.6

It is of some interest that the publication of our paper was considerably delayed in the review process. It was finally published unchanged. Much later I discovered that this delay had been due to the action of a single reviewer, who, it appeared had an interest in a company that marketed tcPO2 monitors!

In mid-1984, I left HSC Toronto to assume the position as Chief of Anesthesia at the newly opened British Columbia’s Children’s Hospital in Vancouver. When I arrived there, I found that on the proposed budget for the department was a tcPO2 monitor! I cancelled this order and replaced it with an order for Nellcor 100 pulse oximeters. By the middle of 1985 we had one Nellcor pulse oximeter in every operating room.

The model # N-100 was marketed by Nellcor in 1983 with an extensive advertising campaign. They mass produced a machine which was extremely easy to apply to the patient, required no calibration, and appeared to reliably follow arterial oxygen saturation levels. Although Nellcor’s promotions through ASA and IARS meetings and in the journals were outstanding, it was a product that sold itself – it was a product whose time had come!

Sales of the machines rapidly accelerated, and though there were some other models available, “Nellcor” and “Pulse Oximeter” became almost synonymous. By the end of 1986 a pulse oximeter was in nearly every operating room, recovery room, and intensive care unit in North America. The Anesthesia Patient Safety Foundation bulletin of Spring 1987 predicted:

“Projecting current trends, it is likely that by the end of 1988, enough oximeters will have been sold for there to be one available for every operating room in the country”.

In October of 1986 the American Society of Anesthesiologists recommended that every anesthetized patient should have arterial oxygen level constantly monitored. “During all anesthetics, a quantitative method of assessing oxygenation such as pulse oximetry shall be employed. When the pulse oximeter is utilized, the variable pitch pulse tone and the low threshold alarm shall be audible to the anesthesiologist or the anesthesia care team personnel.”7

In five years, something that had almost never been done before became a recommended standard of practice.

An original Nellcor N-100 monitor is on display in the Wood Library-Museum of Anesthesiology in Chicago. The accompanying catalogue description includes the following:

“Like most modern medical devices pulse oximeters represent advancements in technology and a culmination of years of knowledge in basic and clinical sciences gained by the trial and error of numerous researchers. Japanese researcher, Takuo Aoyagi is often recognized for putting the “pulse” in pulse oximetry by using the waveform produced by the arterial pulse to measure and calculate SpO2. He first reported on the work of his team in 1974.”

*Comment: It has a large (5 x 5 cm) ear cover to heat and arterialize the ear. It adopted 8 wavelengths and has a rather slow response time, but its accuracy in a laboratory setting was excellent. It was used in physiology laboratories but never became a clinical monitoring device because it was bulky and cumbersome.