Quality of care in medicine has been defined by three components: structure, process, and outcome.3 Structure refers to health care resources and their organization, including facilities, equipment and personnel. The process of care is how these resources are used to care for patients. This includes adherence to standards and guidelines, as well as the many individual tasks involved in patient preparation, anesthesia induction, maintenance, emergence and recovery. The outcome is the end result of the patient’s exposure to medical care. In anesthesia, desired outcomes include no harm to the patient, good surgical conditions, and satisfactory postoperative pain control. A desired economic outcome is low cost. A safe anesthesia care process is neither absolutely necessary nor sufficient to ensure a good outcome, as there are factors outside the anesthesiologist’s control (patient physiology, surgical skill, luck) that also contribute to patient outcomes. However, it is believed that a safe process will maximize the chances of a good outcome, and safety in provision of anesthesia care is supported by professional standards, guidelines, and customary practice.

Other contributors to this newsletter have addressed recent trends in production pressure that threaten anesthesia patient safety. Production pressure stems from components of the structure of anesthesia care that are outside the direct control of the anesthesia care team and its leadership. For example, recent trends have seen the surgical caseload increase while reimbursement levels declined and manpower shortages made hiring difficult, leaving the anesthesia team faced with increasing production (changing the process) and maintaining safety (outcomes) with little, if any, control over resources (underlying structure of care). This raises a number of questions:

Structure, Process and Outcome: An Example from an Academic Medical Center

The challenge to increase productivity with a fixed number of attending anesthesiologists and operating rooms presented several options:

Each of these options had limits. For example, case duration was controlled by surgeons and was also affected by the teaching mission of the hospital (teaching extends case time). Concurrency was limited by payer regulations as well as teaching goals and policies. An average concurrency of two rooms/attending anesthesiologist was the general goal. For teaching and safety reasons, concurrency was restricted to one room/attending during introductory training (July and August for CA-1 residents and the beginning of cardiac and obstetrics rotations for more advanced residents). A Presurgery Screening Clinic was established to better organize pre-anesthesia patient evaluation and reduce case delays and cancellations. This clinic was staffed by one attending anesthesiologist and one anesthesia resident plus specially trained nurses. After efficiencies were achieved in turnover time, delays and cancellations, and selected rooms were kept open longer each day, attention was turned to optimizing concurrency. 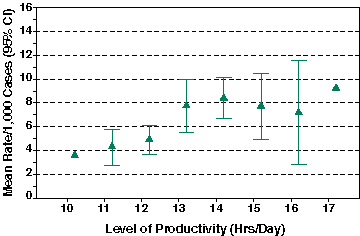 The economic goal of optimizing concurrency and other efficiency efforts was to increase productivity, i.e., complete more cases with fixed or declining resources. We measured productivity by dividing total attending anesthesia hours (time units) by the sum of clinical days worked by all attending anesthesiologists each month. This measure captured increased caseload resulting from more efficient use of resources (concurrency, turnover time, delays, etc.) and extended working hours per FTE anesthesiologist. Productivity was highly correlated with concurrency. Productivity increased from an average of 11-12 hours/clinical day to 15-16 hours/clinical day as our anesthesia service achieved more efficient use of resources.4 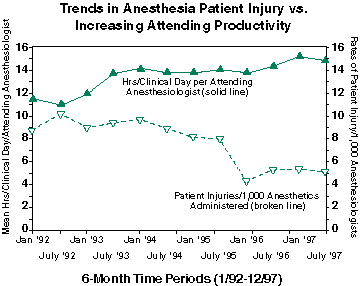 Our Anesthesia Service uses a self-reporting CQI Program to track critical incidents and adverse outcomes associated with anesthesia care.5 We were concerned that the increases in productivity might degrade the quality of anesthesia care and examined our CQI database for any evidence of erosion of patient safety. We looked at trends in patient injury or increased levels of care caused by anesthesia problems (i.e., mechanical ventilation in the PACU due to prolonged neuromuscular blockade) that might be correlated to the drive for increased productivity. We also investigated trends in critical incidents (close calls with no resulting injury or increased level of care) and productivity.4

This case example is drawn from one academic medical center and is limited in the generalizations that can be drawn. There are also limitations in the data used in the analysis, including the self-report nature of the CQI data and the retrospective nature of the analysis with lack of control over extraneous variables. Our example does not indicate that patients are being harmed by increases in efficiency and productivity within a team anesthesia model of care. However, the unexpected decrease in patient injuries with a concurrent increase in critical incidents could be interpreted as a warning. If anesthesia teams became more adept at rescuing adverse events and preventing patient injury at higher productivity levels, can this level of production and safety be maintained over the long term? It is still too early to answer this question. While we can conclude from our limited data that anesthesia care in our institution is still a safe process with generally favorable outcomes, we cannot predict continued safety under continued resource restrictions. It appears that anesthesiologists have effectively maintained the impressive improvements in patient safety that have occurred over recent decades. However, we should remember that the link between the process of care and the outcome is tenuous. Continued favorable outcomes should not be interpreted as evidence that risk of patient injury has not increased. We can only conclude that any erosion in anesthesia patient safety that may be underway has not yet resulted in readily identifiable adverse outcomes that may be the result of pushing the limits of production.