Perhaps the greatest strength of the APSF is its ability to gather multiple medical disciplines and their affiliated societies, organizations, and health care industries together to collaborate on patient safety issues. The APSF leveraged its role in this informal network by alerting health care providers in 1998 to an apparent increase in cases of the devastating complication of postoperative visual loss (POVL), particularly associated with spine surgery in the prone position.1 These cases were occurring during a surge in instrumented spinal fusion procedures, which were associated with higher volumes of blood loss and longer operative times. Though POVL had long been acknowledged in the literature starting in the 1950s, most health care professionals thought it was related to either infarctions of the visual cortex (cortical blindness) or globe compression, an injury that causes central retinal artery occlusion (CRAO, Figure 1). In the early- to mid-1990s, an increasing number of POVL cases after spine surgery in the prone position were published associated with injury of the optic nerve, known as ischemic optic neuropathy (ION, Figure 1); however, general awareness of this complication was still low. Very few individuals in the anesthesia community were aware at this time that blindness could occur in these cases without cortical infarction or compression of the globe.2 The lack of awareness was undoubtedly related to institutional variability in the incidence of ION associated with spinal fusion surgery. Although smaller multicenter studies identified an incidence as high as 0.1%,3 national data revealed a much lower rate of 0.017% from 1996 to 2005.4 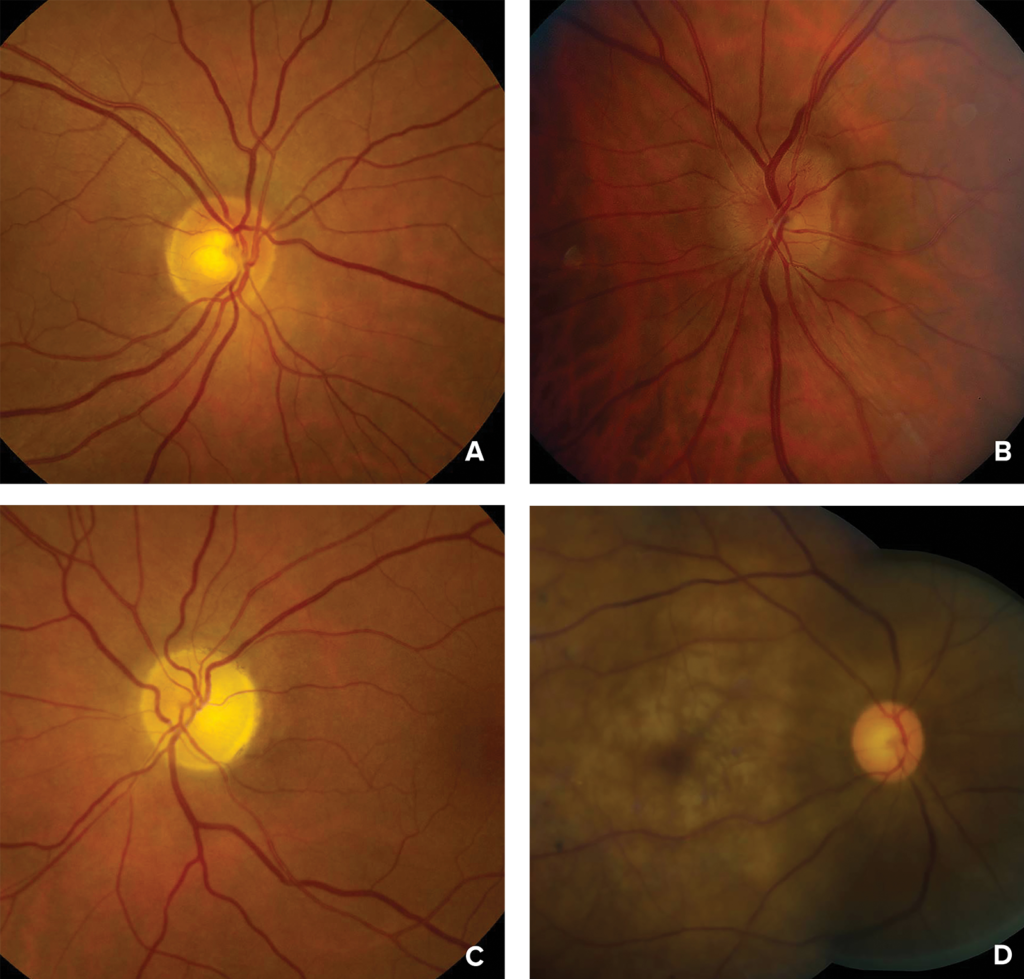 Ann Lofsky, an anesthesiologist and previous consultant to the APSF Executive Committee, and Mark Gorney, an internist, co-authored the APSF Newsletter article on POVL in 1998.1 They were affiliated with The Doctors Company professional liability company, and as reviewers of professional liability claims, they had an opportunity to identify trends in perioperative complications that involved anesthesia care, long before these complications would be available for analysis in any national database. They published a brief description of 2 cases (which were composites of 12 similar claims) of POVL caused by ION occurring in association with spine surgery in the prone position. They suggested that the combination of deliberate hypotension, anemia, and prolonged duration in the prone position with elevated venous pressure were the most likely contributory factors to this problem. They noted one case that occurred with the head in Mayfield pins, a finding that eliminated globe compression as a potential contributory cause for that particular case.

By 2006, the ASA POVL Registry had collected 93 POVL cases associated with spine surgery, 83 cases diagnosed with ION and 10 cases with CRAO.5 The perioperative characteristics of patients diagnosed with CRAO and ION were markedly different. Of the CRAO cases, all had unilateral visual loss, 70% had periocular trauma, and none were placed in Mayfield pins. In contrast, 55% of ION cases had bilateral visual loss, almost one-fifth were in Mayfield pins, and only 1 of 83 had any periocular trauma. The estimated blood loss, subsequent volume administered, and duration of procedures were markedly and significantly greater in ION cases compared to CRAO cases. These findings were consistent with the theory at this time that ION was associated with systemic causes and not direct compression from a headrest. Moreover, two-thirds of the ION patients were relatively healthy with an ASA physical status of 1–2, and patients were as young as 16 years old. It appeared that anyone was vulnerable to this catastrophic complication. Hypotension and anemia were not consistently identified in the ION cases, though these factors could not be ruled out as contributory causes.

The ASA Committee on Standards and Practice Parameters quickly utilized this information to develop the first practice advisory related to this complication, with subsequent updates in 2012 and 2019.6-8 Expert neuro-ophthalmologists, anesthesiologists, neurosurgeons, and orthopedic spine surgeons were included on this task force to develop the practice advisory. Of note, one of the first recommendations was to consider consenting patients for this complication. It became a very controversial issue between spine surgeons and anesthesia professionals as surgeons were concerned that it would unnecessarily frighten patients about a complication that many had never encountered in their career. As awareness of this injury increased, collaboration between the ASA, APSF, and professional neurosurgical and orthopedic societies associated with spine surgery addressed the issue of consent in the practice advisories. The APSF subsequently held a special multidisciplinary conference on the topic of POVL in 2012 with a focus on preoperative consent of patients undergoing spine surgery for the risk of POVL. A consensus statement from the conference was published in 2013. Two educational videos were developed by the APSF in 2014 elucidating the rationale behind preoperative consent for this complication as well as simulations on how surgeons and anesthesia professionals can approach patients for consent for POVL.9,10

Another part of this collaborative, but informal group of health care organizations interested in determining the etiology and prevention of ION was the Society of Neurosurgical Anesthesia and Critical Care (SNACC, now the Society for Neuroscience in Anesthesiology and Critical Care). Members of SNACC from across the country had an intense interest in this complication and formed the POVL Study Group. This group performed a case-control study with the ASA Closed Claims Project utilizing POVL cases from the ASA POVL Registry and controls from SNACC members’ respective academic institutions. Findings from this study were published in 2012 and identified six risk factors associated with ION after surgery in the prone position. These risk factors included male sex, obesity, Wilson frame use, longer anesthetic duration (a surrogate value for operative duration), greater estimated blood loss, and a lower percent of colloid used in the non-blood fluid administration (Table 1).11 This study remains the best data we have on this topic because of the large number of cases with one ophthalmologic diagnosis occurring after the same procedure and the detailed perioperative data that are absent from national databases. However, it has significant limitations because of its case-control methodology and voluntary submission of cases to the ASA POVL Registry. Results from this study were utilized to guide updates of the ASA practice advisory for this complication, with the latest update and recommendations published in 2019 (https://anesthesiology.pubs.asahq.org/article.aspx?articleid=2718348).8

Interest in this complication was significant and numerous case reports, retrospective multicenter case series, case-control studies, studies from national databases and literature reviews were published on the topic of POVL. These articles provided additional useful information on this complication for the ASA practice advisories and maintained a high degree of interest in determining the etiology, prevention, and treatment of POVL. The leading theory on the etiology of ION associated with spinal fusion surgery is that the elevated venous pressure in the prone position for a prolonged period of time is a major contributory factor.11,12 Obesity with compression of the abdomen in the prone position and use of the Wilson frame which places the head in a more dependent position will both exacerbate venous congestion in the head in the prone position, and were identified as risk factors for this complication.11 Further support for this unproven theory is the increased risk of ION in other procedures that have elevated venous pressure in the head such as bilateral radical neck dissection and robotic procedures with the head in a steep head-down position.

After these enormous efforts from numerous avenues, national data suggested that we had a success story. Data from the Nationwide Inpatient Database demonstrated a 2.7-fold decline in ION cases associated with spinal fusion surgery from 1998 to 2012.13 It is unclear if this improvement was related to the tremendous work of the ASA, the ASA Closed Claims Project, SNACC, APSF, the North American Neuro-Ophthalmology Society, the American Association of Neurologic Surgeons, the North American Spine Society, and numerous other health care professionals. Michael Todd, MD, suggested in his editorial that several changes may have occurred during this time to account for this success including decreased use of deliberate hypotension, decreased use of the Wilson frame by spine surgeons, and perhaps slightly shorter operative times.14 Additionally, surgeons have increasingly adopted minimally invasive techniques that are associated with lower estimated blood loss.15

Further research into the etiology of this complication is critical; however, it is hindered by the low incidence of this complication, the ethical limitations of performing any interventional studies in humans and the lack of a suitable animal model. Is everyone vulnerable to this complication given similar perioperative surgical events and anesthetic management, or do certain unique anatomic, physiologic, and genetic factors contribute to this injury? These factors would not be identified in a case-control study or many other study designs. Research into potential treatment options for ION and other causes of POVL is equally as important, as POVL can occur after numerous other types of operations including cardiac surgery, vascular surgery, head and neck dissections, orthopedic surgery, general surgery, and robotic surgery (prostatectomy and hysterectomy) as well as in patients who have major gastrointestinal hemorrhage and other critical illnesses. No proven beneficial treatments for perioperative ION have been identified, although many neuro-ophthalmology consultants have recommended normalization of blood pressure, avoidance of significant anemia, and head-up positioning if significant facial edema is present. We should celebrate this partial success story, but there is clearly still much work to be done.

In closing, I would like to acknowledge the small “country” that participated in and drove these research and educational endeavors. The list of contributors to these efforts would easily exceed the length of this article, so space limitations will only allow a small portion to be named individually including Steven Roth, MD, Michael M. Todd, MD, Karen B. Domino, MD, MPH, Karen L. Posner, MD, Nancy J. Newman, MD, Nayak L. Polissar, PhD, Frederick W. Cheney, MD, Robert K. Stoelting, MD, Mark A. Warner, MD, Ann Lofsky, MD, Richard T. Connis, MD, Robert A. Caplan MD, and the SNACC members from The POVL Study Group.

Lorri A. Lee, MD, is a practicing anesthesiologist in Richland, WA, former Director of the ASA POVL Registry and member of the ASA Task Force on Perioperative Visual Loss.