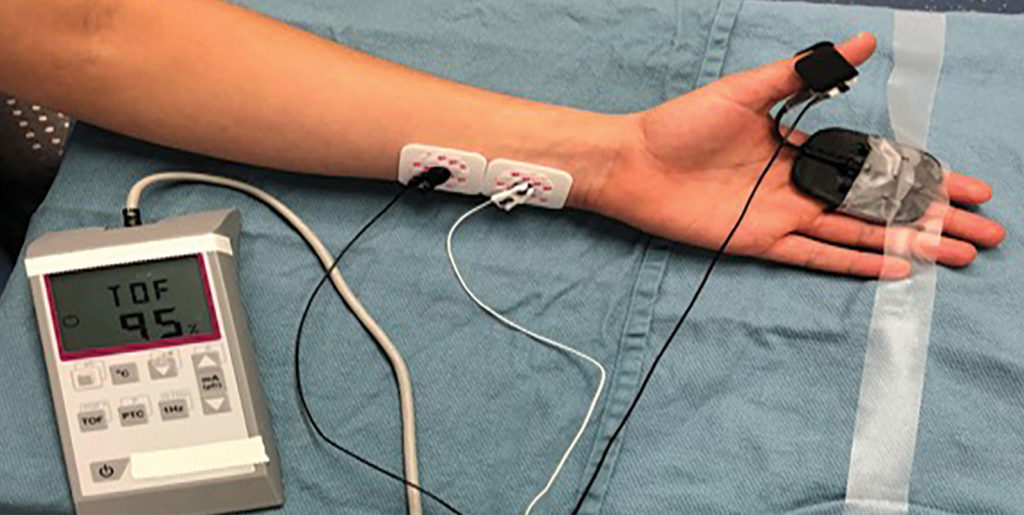 In the first article, Robert Stoelting, MD, summarized the opinions of the APSF relating to the use of qualitative monitoring (peripheral nerve stimulator) and quantitative monitoring (devices which objectively measure muscular function and display the results) in the perioperative period (Figure 1).1 The APSF recommended that every patient receiving a muscle relaxant should have at least qualitative, and preferably quantitative monitoring, to assess requirements for reversal agents and adequacy of neuromuscular function prior to tracheal extubation. Literature was reviewed documenting that PRNB was a significantly underappreciated problem that occurred in up to 40% of patients. Subjects with train-of-four (TOF) ratios < 0.9 (the threshold for adequate neuromuscular recovery) were at risk for a number of adverse outcomes including hypoxemia, airway obstruction, impaired pharyngeal function and an increased risk for aspiration, delayed PACU discharge, postoperative pulmonary complications, and need for reintubation. Although evidence clearly documented that quantitative monitoring could significantly reduce the risk of PRNB, these devices were infrequently applied in clinical practice. Possible reasons why clinicians were slow to adopt quantitative monitoring included the erroneous belief that PRNB was an uncommon problem, the unavailability of simple, easy-to-use devices, and the over-reliance on insensitive indicators of neuromuscular recovery (5-second head-lift and no fade observed TOF stimulation). Robert Stoelting concluded by stating that North American professional anesthesia associations should provide recommendations that neuromuscular monitoring (qualitative, and ideally quantitative) should be used whenever muscle relaxants are administered.

In the second article, investigators from The Massachusetts General Hospital, Boston, MA, reported on an evidence-based initiative instituted at their hospital to decrease the incidence of PRNB.2 This initiative consisted of four components: implementation of an education program; distribution of a cognitive aid; provision of feedback regarding departmental progress; and the adoption of a TOF documentation requirement for the department’s quarterly QI incentive bonus. Department-wide presentations provided information regarding the incidence of PRNB and associated clinical outcomes. The cognitive aid, which was a TOF-based neostigmine dosing guide, was distributed to all members of the department. Finally, quarterly QI bonuses were tied to the rate of documentation of the number of twitches (TOF count) within the 15 minutes of neostigmine administration. This initiative was an example of an integrated interdisciplinary approach to promote sustained adoption of best practices related to neuromuscular management, instituted with the aim of reducing PRNB and improving patient safety.

A third article reviewed the development and regulatory history of sugammadex in the United States.3 Anton Bom, MD, at the Neuromuscular Research Group at Organon Newhouse Scotland, determined that modified cyclodextrins would bind steroidal muscle relaxants. The first human study with this new agent was performed and published in 2005, and sugammadex received regulatory approval in the European Union in 2008. At this same time in the United States, the FDA issued a Not-Approvable Letter over concerns relating to possible anaphylactic reactions, as well as the potential effects of the drug on coagulation and on the QT interval of the EKG. After conducting additional studies and further submissions to the FDA, sugammadex received FDA approval on December 16, 2015.

In the fourth article, Karl Hammermeister, MD, and colleagues briefly reviewed the literature examining the impact of neuromuscular management strategies on postoperative outcomes.4 An early large-scale investigation by Beecher and Todd (1954) reported that postoperative mortality was six times higher in patients administered muscle relaxants, compared to a cohort managed without these agents.5 Hammermeister et al. noted that there were only a few studies published comparing outcomes in patients given reversal agents versus those administered none. In a large clinical trial by Debaene et al., the risk of PRNB was examined in patients given a single intubating dose of a muscle relaxant with no reversal agent. The investigators reported that in those patients in whom two or more hours had passed since muscle relaxant administration, 37% of these subjects had TOF ratios < 0.9.6 The review concluded by stating that there was a consensus in the literature that PRNB was common and was associated with an increased risk of adverse outcomes, particularly respiratory. In addition, neuromuscular monitoring and appropriate reversal with neostigmine was highly variable amongst anesthesia professionals, and these practices likely accounted for the high incidence of PRNB.

What Do We Now Know About Neuromuscular Management and Postoperative Outcomes?

Since the publication of the February 2016 APSF Newsletter, a large number of clinical studies have been published, which have examined the incidence of PRNB in clinical practices, complications associated with PRNB, the impact reversal strategies have on outcomes after surgery, and the development of new quantitative monitors.

Investigations have continued to document a high incidence of PRNB in anesthesia practices around the world. The RECITE-US study measured TOF ratios in 255 patients undergoing abdominal surgery in the United States.7 The investigators observed that the majority of patients (64.7%) had TOF ratios < 0.9 at the time of tracheal extubation, despite reversal of rocuronium with neostigmine and the use of qualitative peripheral nerve stimulation. Similar findings were observed in RECITE trials performed in Canada8 and China.9 These findings suggest that PRNB continues to be a common anesthetic complication when quantitative monitoring and sugammadex are not used.

Failure to reverse neuromuscular blockade may increase the risk of postoperative pulmonary complications. In a large databased investigation, Bulka et al. observed that patients who were not administered a reversal agent had a 2.3-times higher risk of postoperative pneumonia compared to those given neostigmine.13 In a similar large investigation of 11,355 surgical patients, the incidence of postoperative respiratory complications (defined as failure to wean, pneumonia, or reintubation) was significantly higher in patients who were not reversed versus those who were given neostigmine.14 A third databased investigation determined that patients who were not reversed (versus neostigmine reversal) had higher incidences of major complications (6.05% vs. 1.7%), need for reintubation (4.6% vs. 0.8%), and unplanned ICU admissions (3.2% vs. 0.8%).15

Recent studies have documented that sugammadex may significantly reduce the risk of PRNB and beneficially impact outcomes related to PRNB. Oh et al. retrospectively collected data on 1,479 patients undergoing abdominal surgery whose neuromuscular blockade was reversed with either neostigmine or sugammadex.16 Patients in the sugammadex group had a 34% lower 30-day unplanned readmission rate, a 20% shorter hospital stay, and a 24% reduction in hospital charges. A prospective observational study (558 patients) reported that major respiratory complications (pneumonia or atelectasis) occurred in 1.1% of patients reversed with sugammadex, versus 7.2% to 9.7% of all patients not reversed or reversed with neostigmine.17 Neuromuscular monitoring was used in only approximately 30% of patients in each group, which may have explained the lack of benefit observed with neostigmine reversal (neostigmine is ineffective if administered at a deeper level of blockade). A large multicenter observational matched-cohort study examined the effect of choice of reversal agent (neostigmine or sugammadex) on major postoperative pulmonary complications (pneumonia, respiratory failure, or other pulmonary complications).18 In the study, 22,856 patients receiving sugammadex were matched with 22,856 patients given neostigmine. The investigators observed that sugammadex administration was associated with a 30% reduced risk of pulmonary complications, a 47% decreased risk of pneumonia, and a 55% reduced risk of respiratory failure. In contrast to these studies, a large multicenter observational study (POPULAR) did not find that the administration of reversal agents was associated with a reduced risk of postoperative pulmonary complications.19 Additionally, better pulmonary outcomes were not observed in patients given sugammadex versus those administered neostigmine. However, a number of Letters to the Editor were subsequently published outlining concerns relating to the study, which included limitations inherent in many observational studies such as lack of standardization of anesthetic, ventilatory, or fluid management; improper management of monitoring and reversal of neuromuscular blockade; and an inability to oversee potential protocol violations or other factors resulting in bias.

A recent Consensus Statement on the Use of Perioperative Monitoring recommended that quantitative monitors should be used whenever a nondepolarizing muscle relaxant has been administered.20 However, in order for objective monitors to be widely accepted into clinical practices, improvements in the design of the devices are required so that function is not affected by patient hand position, monitors are self-calibrating and provide reliable and repeatable results, and monitor setup times are minimal.16 Unlike first-generation technology, recently developed quantitative monitors appear to fulfill most of these criteria. Three-dimensional acceleromyographic (AMG) technology has been recently incorporated into quantitative monitors developed for routine intraoperative use. Good agreement between the TOF-Watch SX with calibration and preload application (clinical “gold standard”) and an uncalibrated three-dimensional acceleromyography monitor has been observed throughout all stages of neuromuscular recovery.21 Portable electromyographic (EMG) devices have also been recently developed and approved for routine clinical care. Train-of-four ratio data can be rapidly obtained after placing an electrode strip on the hand and connecting the strip to a cable. EMG monitors provide accurate quantitative data without the need for immobilization of the studied muscle, preload application, or free movement of the thumb (arms can be tucked at the sides).20 However, further studies are needed to assess the accuracy and reliability of these new quantitative monitors in clinical practices.

Despite advances in pharmacology and technology that have occurred over time, PRNB continues to occur frequently in clinical practices, with a rate that has remained essentially unchanged for four decades. These important articles published in the February 2016 APSF Newsletter helped to raise awareness of this important patient safety issue and helped pave the way for further research and improvements in clinical care. With the increasing use of both sugammadex (dosed appropriately based upon neuromuscular monitoring) and quantitative monitoring by anesthesia care teams, it is likely that the risk of patients suffering complications from PRNB will be reduced in the coming decade.

Dr. Murphy is presently a speaker for Merck.