Optimal outcomes in crisis situations require that critical steps are performed in a timely manner. Increasing evidence suggests that checklists facilitate completion of critical steps in crisis management. For example, a recent simulation-based study in the operating room (OR) revealed that teams only missed 6% of critical steps when crisis checklists were used, compared to 23% of critical steps when they were not.1 Evidence suggests that Emergency Manuals (EMs) are being successfully used during clinical critical events in the OR.2 Furthermore, a published article has demonstrated that EMs have been incorporated into use throughout many centers in China.3 Two major anesthesia societies in China have encouraged anesthesiologists to incorporate the use of EMs into the management of critical events after appropriate multidisciplinary training.4

Training a trainer is one of the most efficient ways to spread new medical practices.7 While simulation training can be obtained by attending workshops, they are often time-consuming events that require participation, fees, and travel costs. Many anesthesia professionals are unable to participate in multiday simulation instructor workshops because of their busy work schedules and hospital policy. We recently explored the effectiveness of a two-hour EM simulation instructor training course during the Chinese Association of Anesthesiologists (CAA) annual meeting (Figure 1). Attendees of the annual meeting were able to receive EM simulation training and become qualified teachers. 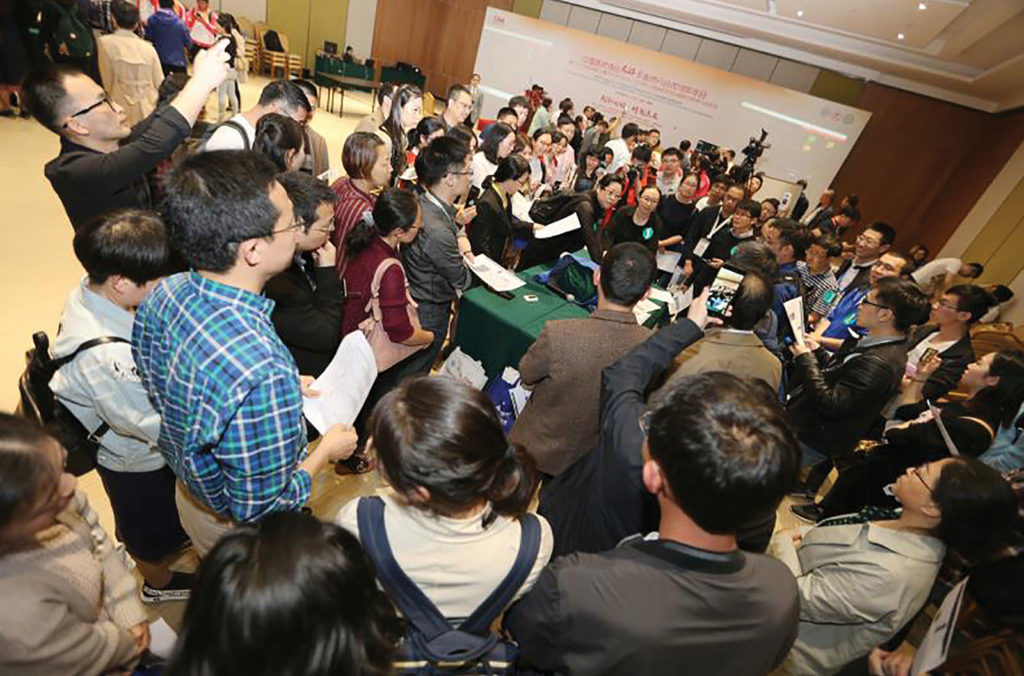 A training course announcement was advertised two months before the meeting, in order to recruit participants. Participants were required to register (in advance via email and social media). Each course attendee participated in three standardized simulation scenarios (anaphylaxis, difficult airway, local anesthetic toxicity), which were developed by the course facilitators. Scripts for the simulation scenarios, which included debriefing questions, were sent to registered participants in advance of the course. The participants were encouraged to review the scripts and related topics in anesthesia textbooks. Prior to the meeting, the course participants were divided into three groups. The facilitators for the course were EM simulation instructors in their home institutions and came from the USA and China. The facilitators included Drs. Jeffrey Huang, Jinlei Li, Jingping Wang, Qi Li, Fan Ye, Yiqi Chen, Meijuan Yan, and Jiayan Wu.

The course was organized around the simulation scenarios with two facilitators assigned to each station. Each station conducted the same scenario for the whole training course. Each of the three groups used different simulators to provide participant experience with different simulation tools and fidelity. One station used a high-fidelity simulator Laerdal mannequin (Laerdal, Wappingers Falls, NY, USA) in conjunction with an anesthesia machine. Another used a CPR mannequin and an iPad, which displayed simulated vitals generated by the SimMon application (Castle Andersen ApS, Denmark). The final group used a self-made simulator created from a facilitator’s jacket and table cloth. Each scenario lasted 40 minutes, which included debriefing. During the first round, the participant was assigned a role by the facilitators. The roles included an anesthesia provider, attending physician, a chief physician surgeon, operating room nurses, additional helpers, and an EM reader. The team was introduced to each scenario by a facilitator who provided the clinical background and answered questions with regards to the scenario and demonstrated use of the simulation equipment. The participant then took part in the scenario, which included an EM reader role. The EM reader was instructed to read the scenario-relevant chapter from the manual while the team followed the instructions and performed the tasks. During the debriefing, participants evaluated their own performance. Technical and nontechnical problems related to performance and teamwork were discussed. Clinical errors were identified either by the team members or by the facilitators. During this process the participants learned to utilize the debriefing questions provided to them with the scenario scripts. Through this training, the participants became familiar with the simulation organization and the training process. Attendees of the CAA meeting who did not register for the training course were allowed to observe and provide feedback.

After 40 minutes, the group switched to a different station. By the second and third stations, it was apparent (from the perspective of the experienced mentors) that the participants were more confident in their simulated roles and were acquiring the skills of a facilitator capable of conducting simulation training and organize debriefing.

In summary, the two-hour EM simulation training course provided during the CAA meeting was well received. However, it required careful planning, the participants’ strong passion to learn, the facilitators’ meticulous preparation, and CAA leadership support. This experience can be applied in different regional or national meetings to train more qualified teachers.

Dr. Huang is program director of HCA Anesthesiology Residency at Oak Hill Hospital, program director of HCA Transitional Year Residency at Oak Hill Hospital; professor at the University of Central Florida College of Medicine. He serves on the APSF Committee on Education and Training and on the ASA Committee on International Collaboration.

Dr. Huang has no conflicts of interest to declare.