In February 2010, the Anesthesia Patient Safety Foundation (APSF) announced the availability of complimentary copies of the 18-minute educational DVD, Prevention and Management of Operating Room Fires that was produced in association with ECRI Institute.1 A principal objective of the APSF fire safety video was to emphasize the potential role of supplemental oxygen in surgical flash fires.

Between February 2010 and November 22, 2011, APSF received 3677 online requests for the APSF fire safety video and 587 of those requesting the DVD listed their professional degree as MD, DO, or CRNA.

To evaluate the impact of this educational video on how anesthesia professionals (MDs, DOs, CRNAs) approached the administration of supplemental oxygen to “at risk patients” (operations above T5 utilizing an ignition source in proximity to an oxidizer-enriched atmosphere),2 APSF sent an anonymous electronic survey (24 questions, estimated completion time less than 4 minutes) to those 587 individuals classified as anesthesia professionals.3

Ultimately, APSF could confirm delivery of the survey to 541 anesthesia professionals. A total of 167 responses (initial and second request) were received for a response rate of 30.9%.*

Based on the survey responses, APSF believes the fire safety video “changed practice” and had an impact on “how anesthesia professionals administered supplemental oxygen and managed the airway” in at risk patients.

When asked if “securing the patient’s airway introduced more risk than did supplemental oxygen (greater than 30%) with a natural (unsecured) airway” in those patients considered to be at risk for surgical fires, 24.5% answered “Yes” and 75.5% answered “No.”
When asked if the APSF fire safety video changed how they selected patients to receive supplemental oxygen, 79.3% responded “Yes” (Figure 3) and 91.5% agreed the fire safety video helped them identify patients at risk for surgical fires (Figure 4).

The majority of survey respondents indicated the APSF fire safety video resulted in a policy change (individual, group, hospital) on how supplemental oxygen was administered to at risk patients (Figure 5).

Additional survey responses revealed that 89.5% of the 167 respondents had been in clinical practice more than 10 years and 69.1% indicated they were aware of one or more operating room fires (17% more than two fires) in their institution/facility (Figure 6).
Survey responses indicated the APSF fire safety video was most likely to be viewed as part of a departmental or institutional educational program that included multiple categories of health care professionals (Figure 7). 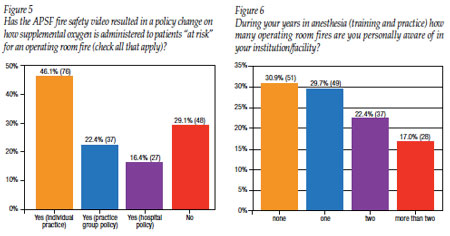 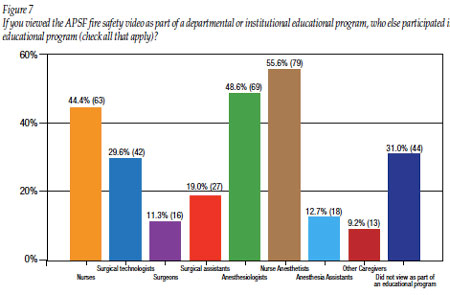 In this era of information overload, APSF believes that educational videos (focus oriented and succinct) offer an opportunity to reach the appropriate audience and change practice. Although surveys cannot be characterized as meeting standards of scientific rigor and may be subject to flaws in their interpretation, these survey results suggest the APSF fire safety video did change practice (administration of supplemental oxygen and management of the patient’s upper airway) among those anesthesia professionals responding to the survey.

* The complete survey and responses can be requested from Dr. Stoelting ([email protected]).