The following are excerpts from the introduction to the series on patient safety that appeared in the New England Journal of Medicine.1

These observations were generated as a result of the IOM’s report titled “To Err is Human: Building a Safer Health System.”2 Recently, Leape and Berwick published a follow-up to the IOM report titled “Five Years After To Err Is Human. What Have We Learned?”3 They note that improvements are still possible:

“Five years ago, the Institute of Medicine (IOM) called for a national effort to make health care safe. Although progress since then has been slow, the IOM report truly “changed the conversation” to a focus on changing systems, stimulated a broad array of stakeholders to engage in patient safety, and motivated hospitals to adopt new safe practices. The pace of change is likely to accelerate, particularly in implementation of electronic health records, diffusion of safe practices team training, and full disclosure to patients following injury.”

In keeping with the belief that errors result largely from the failures of systems, I would like to point out 3 potentially dangerous anesthesia-related system problems whose easy correction would help prevent adverse outcomes: 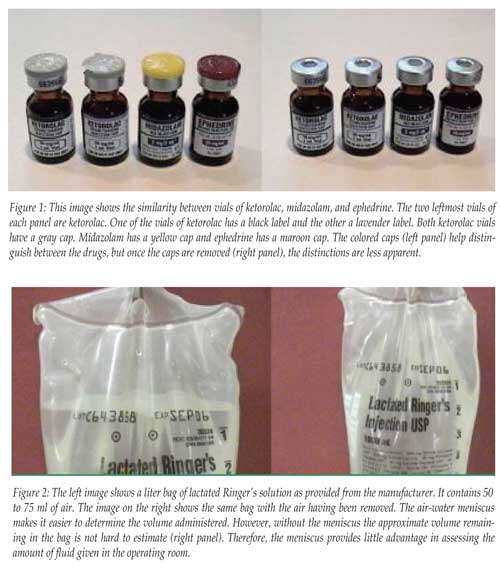 I do not believe that drug swaps will ever be totally prevented, nor am I suggesting that anesthesiologists not be vigilant. It is always good practice to check a vial 3 times: once before opening it, a second time when removing the agent, and a third time before discarding the vial. I do believe, however, that the system changes I propose here will eliminate some of the otherwise inevitable drug swaps.