A front-page story in the New York Times (10/31/2012, A1, Harris) reports, “President Obama will issue an executive order on Monday that the administration hopes will help resolve a growing number of critical shortages of vital medicines used to treat life-threatening illnesses, among them several forms of cancer and bacterial infections.” The order “instructs the FDA to do 3 things: broaden reporting of potential shortages of certain prescription drugs; speed reviews of applications to begin or alter production of these drugs; and provide more information to the Justice Department about possible instances of collusion or price gouging.” The Times notes that it is “a modest effort that, while possibly helpful, is unlikely to resolve the problem soon or entirely.”

Medscape Today (10/29/2012, Helwick) reported, “Drug shortage is an issue throughout the health care system today, but it is particularly concerning for anesthesiologists, because more central nervous system (CNS) drugs are in short supply than any other class of drugs.” And “the Drug Shortage Survey of 1373 ASA members conducted in April revealed that 90% of respondents reported a shortage of at least 1 drug and 98% had experienced a shortage during the previous 12 months.” 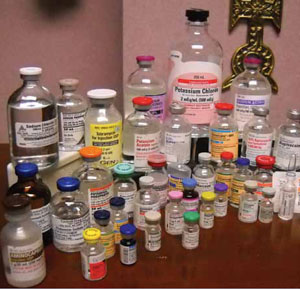 Drug shortages have numerous implications for the institution, providers of care and patients. These include adversely affecting choices for drug therapy, delaying medication therapies or treatments, escalating costs of product and resources to manage shortages, and increasing risk for medication errors and untoward patient outcomes. There also exists an emotional component to the drug shortages of frustration, anger, anxiety, and mistrust that results in strained relationships between the providers and manufacturers; pharmacy and prescribers; patient and providers.4,5

The factors surrounding supply disruptions are multifaceted, involved, and complicated. The supply chain of a drug will typically include multiple stakeholders, such as suppliers of the raw material, manufacturers, regulators, wholesalers/distributors, prime vendors, group purchasing organizations, and the health care system. The supply disruptions can occur at any point in the supply chain. Many times the reason for drug shortages is not disclosed. According to the University of Utah Drug Information Service, 54% of the drug shortages in 2011 did not have an identified reason for the supply disruption.2

Although raw materials were not cited as one of the primary reasons for drug shortages in 2011 (3%), it has been a significant concern in the past such as the heparin raw ingredient contamination several years ago.2 Serious adverse events, including deaths, were reported leading to product recalls and a shortage of heparin.6 The majority (80%) of raw materials or active product ingredients (API) come from countries outside of the U.S.1 The global outsourcing of raw materials can be affected by political unrest and conflict in the country, which can interrupt trade; animal diseases that contaminate tissue where raw materials are obtained; raw material degradation, inclement weather, and other environmental conditions that can impact the growth of plants used for raw material. Hurricanes, fires, tornados, tsunamis, and floods can play an additional role of not only destruction of the raw material but also damage to the raw material facility and obstruction of product transportation.7 The earthquake in Japan has contributed to circumstances leading to several potential shortages, and the Icelandic volcano caused transportation delays resulting in product delays.8

The most commonly identified understood reason for drug shortages in 2011 was manufacturing difficulties. The Food and Drug Administration (FDA) can halt or delay production when noncompliance with current good manufacturing practices (cGMP) occurs. Setbacks caused by older equipment, reallocation of resources away from the manufacturing facility, loss of knowledgeable staff in production/compliance issues due to mergers, and cGMP problems with subcontractors (a subcontractor may supply to one or all of the manufacturers of that product) may also contribute to drug shortages. The lack of resources and staffing from FDA to conduct inspections in a suitable time can also cause delays.1,7

A supply disruption can occur based on corporate decisions by the manufacturer. This may occur when the manufacturer changes formulation which may delay product availability during the transition. Additionally, business decisions are made by the manufacturer that may cause supply disruptions such as shifting their production efforts to another product, discontinuing manufacturing of a product because of inadequate financial returns or delaying production because of the need for a large investment to correct a manufacturing issue. Market approval requirements and post marketing surveillance may cause a shortage due to the manufacturers limiting the available supply. In some circumstances providers and selected suppliers can only obtain product by fulfilling the manufacturer’s requirements. Voluntary recalls from the pharmaceutical manufacturers can also cause a drug shortage. These recalls will normally involve specific lot numbers and may have a temporary effect on the market. The voluntary recalls are based on lack of assurance for product safety or for technical difficulties such as labeling changes.7 The early propofol shortage was based on recalls and also contributing to the shortage was the departure of one of manufacturers from the market.9 Drug shortages can also occur when companies merge. This may include decisions to limit the product lines or move production to a different facility. A small number of companies supplying the same drug can be very challenging when one or more has a supply disruption. Even more problematic is a pharmaceutical company that is the sole manufacturer of the product and develops difficulty supplying the drug.7 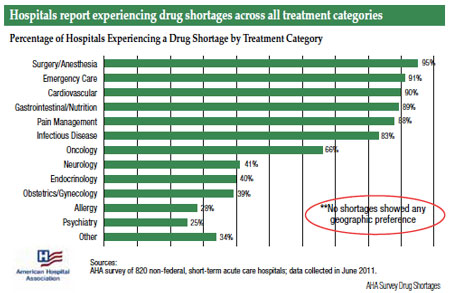 In a recent conference with key stakeholders experiencing drug shortages, pharmaceutical manufacturers attributed some of the burden of drug shortages to the FDA’s Unapproved Drugs Initiative. Interestingly, these are drugs that have entered the market and were only reviewed by FDA for their safety. FDA rules were later expanded to require that the drug be effective and that the manufacturing processes and labeling meet with FDA requirements. Submission of the drug application for the approval of these older drugs is lengthy and expensive. In 2006, the FDA began removal of these unapproved drugs from the market if they failed to comply with the evidence-based system of drug approval.10

Another problem in drug shortages is the lack of notice and the limited time to prepare for the unavailability of product. Adding to this difficulty is lean or tighter inventory levels at almost every step of the drug supply chain. This practice is called “just in time” inventory management and is used by raw product suppliers, manufacturers, distribution centers, and pharmacies. For example, a typical hospital pharmacy may only have a 4-day inventory of drug on their shelves and order this drug on a daily or every other day schedule to replenish this inventory. When a shortage occurs, the hospital will have minimal stock on its shelves and therefore a reduced time to prepare for alternatives. The “just in time” inventory is an established means to lower the cost of inventory on hand and increase cash flow for the center.7,11

Drug shortages can also occur based on an increase in the demand of the product that is greater than the current supply. This can happen when a new indication is approved for an existing drug, new therapeutic guidelines recommend use of the drug, or an outbreak of a disease prompts the increased use of a drug. As an example, during the Swine Flu outbreak, Tamiflu® (oseltamivir) was difficult to obtain based on the increased demand of the drug’s indication to prevent or treat the flu.

Financially, drug shortages drain already limited budgets in a medical facility. Alternative or therapeutically equivalent drugs can cost more than the drugs involved with the supply disruption.11 A further crisis occurs when the sudden demand for the alternative drug occurs and this can cause a secondary shortage.

Once the drug becomes unavailable or limited in supply, resources are needed at the facility to locate different suppliers, prioritize the allocation and location of the remaining stock, investigate the use of other therapeutic products, and communicate the information to staff. When an alternative drug is used, the simple questions of dosage, frequency, preparation, administration, side effects, contraindications, drug interactions, monitoring parameters, and storage requirements are very necessary information. Without this information there may be an increased risk for drug errors. Other causes of errors relate to differing manufacturers, drug strengths, packaging—however, it is only available from a different manufacturer, or has a different strength, packaging, dosage form or volume. Because of the number of supply disruptions and ongoing nature of this dilemma, there has been a continuing potential threat to patient safety. In a 2010 survey conducted by the Institute for Safe Medication Practices, 1 in 4 respondents reported their facility experienced errors due to a drug shortage. Examples of anesthetic drug errors that were reported to the Institute for Safe Medication Practices were:

Drug shortages have been a significant problem over the past decade. The shortage of numerous drugs used in anesthesia has not only been the unavailability of the medication but the number of critical medications amid the drug shortages, long duration of many of the shortages (average time 286 days), and the multiple times throughout the year the shortage reoccurs.12,13 For further information on drug shortages see the FDA website at:

www.fda.gov/Drugs/DrugSafety/DrugShortages/default.htm and the American Society of Health-System Pharmacists at: http://www.ashp.org/DrugShortages/Current/

Tricia Meyer PharmD, MS, is Director of Pharmacy Services at Scott and White Healthcare, and Assistant Professor in The Department of Anesthesiology at Texas A&M Health Science Center, College of Medicine.