The recent and tragic outbreak of fungal infections identified in patients receiving products from the New England Compounding Center (NECC) in Framingham, Massachusetts, has now become the largest reported health care associated fungal outbreak in the U.S.1 Information from this catastrophic event began emerging when the Tennessee Department of Health was notified on September 18, 2012, of a patient with Aspergillus fumigatus meningitis. The patient had received an epidural steroid injection for lower back pain at an ambulatory surgery center 46 days earlier. This 56-year-old index patient initially presented to clinicians with neutrophilic meningitis—most typical of a bacterial infection. After antibiotic therapy failed, an infectious disease specialist investigated and verified the fungal infection.2-4 Ultimately, this 56-year-old index patient did not survive. Eight other patients, including 7 patients treated at the same center as the index patient, were also identified with
fungal meningitis. Health authorities soon identified that all 9 patients had received an epidural injection with preservative free methylprednisolone acetate (MPA) 80 mg/ml compounded by the NECC.4 The Food and Drug Administration (FDA) determined through a microscopic review, that fungal contamination was detected in unopened vials of methylprednsiolone.5 The contaminated MPA was associated with 3 specific lots. An initial voluntary recall on these 3 lots of MPA occurred but was soon followed by an expanded recall of all products distributed from NECC.5,6 In addition, on October 31, 2012, the FDA announced a voluntary recall of all unexpired products from Ameridose, LLC, a sterile admixing service and sister company of NECC. Regulators found deficits in testing procedures; however, no impurities were identified in any of their products.6

As patient data accumulated, the Center for Disease Control and Prevention (CDC) confirmed the principal fungus detected in afflicted patients has been Exserohilum rostratum. Although not a typical human pathogen, Exserohilum species are environmental fungi that are commonly found in soil and grass.7 The first patient (the index case) had a laboratory-verified Aspergillus fumigatus infection.2 Both of these fungi are common in the outdoor environment. The CDC, as of March 2013, has found Exserohilum rostratum as the primary fungal infection although 22 other species were identified including the Aspergillus fumigatus in sickened patients.7 Tests at both the CDC and FDA laboratories on the preservative-free MPA vials reported the same fungus, Exserohilum rostratum, in unopened vials from 2 of the 3 implicated batches. These results support the association between preservative-free MPA vials and the outbreak.6,7 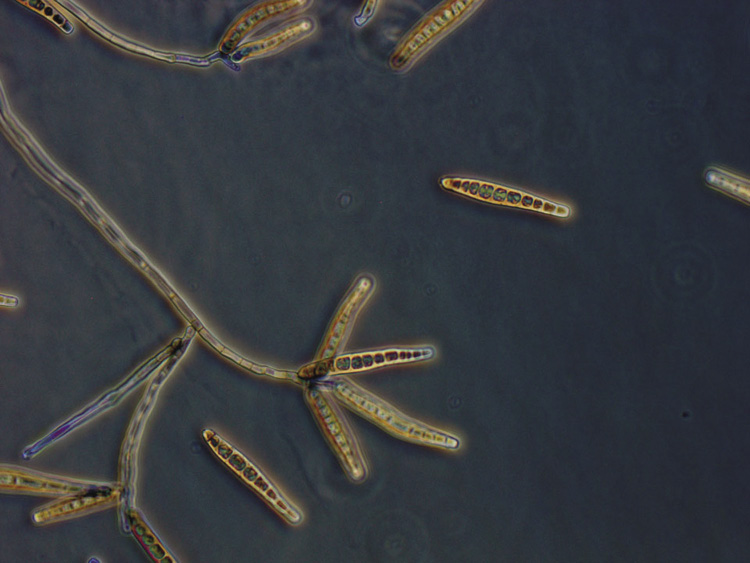 Exserohilum Rostratum Photo used with permission of the CDC.

Authorities estimate 17,675 vials of the MPA from these lots were distributed to 76 facilities in 23 states. Of the tainted lots, the earliest dating of the vials was beginning on May 21, 2012. Regulatory officials calculated that 13,534 individuals may have been exposed to contaminated drug from these lots through epidural, spinal, paraspinal, peripheral joint or other therapeutic injections.1,4 Urban and rural hospitals, ambulatory surgery centers, eye clinics, pain clinics, and plastic surgery centers ordered and administered products from NECC. But other compounded products were also found to have been contaminated during testing by the FDA and CDC. They identified both bacterial (variants of Bacillus) and/or fungal contamination (Aspergillus tubingensis, Aspergillus fumigatus, Cladosporium and Penicillium species) in unopened vials of betamethasone (5 lots), cardioplegia (single lot), and triamcinolone solutions (3 lots)-compounds all prepared by the Framingham Massachusetts pharmacy.6,7

The most recent CDC statistics report 51 deaths and 730 cases of the fungal meningitis and other related infections in this recent 20 state outbreak.8 These infections include not only fungal meningitis but paraspinal and spinal infections as well as peripheral joint space infections. Moreover, recent reports often note localized spinal or paraspinal infections such as abscesses and arachnoiditis. Although there have been reports of infections caused by other products compounded at NECC, the CDC and FDA have no evidence to support this link at this time.9

Although this outbreak, due to compounding of medications, may prove to be one of the most serious and lethal in recent history, it is not the first tragedy that has occurred from tainted products distributed by compounding pharmacies. The Institute of Safe Medication Practices (ISMP) has published a list of selected pharmacy compounding mishaps related to sterile products that have occurred since the 1990s (See Table 1) from compounding and hospital pharmacies. The list describes 200 adverse events including vision loss, blindness, infection, and death from 71 different compounded products.10 Interestingly, the same drug, methylprednisolone, was involved in a 2002 Exophiala dermatitidis meningitis outbreak due to a contaminated compounded injectable. The clinician’s involved with caring for the patients determined that compounding of preservative free corticosteroids requires meticulous sterility to prevent fungal contamination. If sterility is lacking, the concentrated steroids are a suitable media to support the aggressive growth of pathogenic fungi. The author also found that development of the disease may be delayed for up to 6 months post-exposure.11

ISMP thanks Eric S. Kastango, MBA, RPh, FASHP, CEO of ClinicalIQ, for his contribution to this table and for serving as an expert for the related article (www.clinicaliq.com).

Clinicians using compounded medications for the care of patients must recognize that these products are not considered FDA approved or reviewed drugs. These medications are not normally commercially available from a manufacturer in the strength, concentration, or dosage form needed for a specific patient or special application (e.g., epidural injection). Therefore the safety, efficacy, quality, and adherence to federal manufacturing standards may have not been established.5

“Compounding” implies a wide range of complexity from the very simple process of adding one medication to an intravenous solution—a process done daily in hospital pharmacies and operating rooms across the country. However compounding could also be the more complex process of compounding multiple ingredients from raw material. Prior to the 1960s, pharmacists in the local corner pharmacies compounded 80% of all dispensed medications. In the early 1960s, pharmaceutical companies began increasing manufacturing of medications. Thereafter, compounding by local pharmacists greatly diminished. This changed when the need for compounded pharmaceuticals reappeared in the 1980s due to, in part, discontinuation of over 8,000 prescription and non-prescription products.12 The International Academy of Compounding Pharmacists (IACP) estimates that there are 7,500 pharmacies in the United States that specialize in advanced compounding services of which approximately 3,000 provide sterile compounding.13,14

Compounded medications are prepared from component ingredients that can be formulated into capsules, syrups, suspensions, external creams, and gels, and injectables including infusions. Compounding pharmacies prepare medications for patients with allergies to preservatives, dyes, or binder, and for individualized dosage strengths for various patient populations (e.g., infants).13-15 Although all pharmacies may compound, a main function of the hospital pharmacy is to prepare injectables by following strict standards for sterility. These preparations may include total parenteral nutrition, surgical irrigations, chemotherapy drugs, and various medication drips or infusions. Infection risks are much greater from injectable drugs, and standards to prevent these risks have been established by the United States Pharmacopeia (USP). The development of Chapter <797> describes standards and requirements for compounding sterile products in a safe manner (Table 2). USP <797> is a national standard for the process, testing, and verification of any medication prepared for administration to patients.15

*for illustration purposes, not a complete listing of USP Standards

If a hospital, clinic, or medical facility does not have the resources to prepare the compounded product they may select to purchase the needed product from an outside compounding pharmacy. Although the definition of a compounding pharmacy is a company that prepares medications for a specific patient pursuant to a prescription, many facilities will use anticipatory compounding. Anticipatory compounding is making limited quantities of these compounded medications that are not patient-specific but are made for expected patients that will be used in the near future.15 Recent and recurring drug shortages have also dramatically increased the use of outside compounders when the commercial agent is not available.

Compounding pharmacies are overseen by their individual State Boards of Pharmacy for adherence to Board regulations. The Board oversees the licensure and oversight of pharmacists and pharmacy technicians, the process of filling prescriptions, records, documents, environment, and compliance with the state’s laws and regulations designed to protect the public. The FDA authority is for the integrity of the drugs and “Active Pharmaceutical Ingredients” (APIs) that the pharmacy orders, stores, and uses (all raw material should be from FDA registered pharmaceutical ingredient suppliers). The FDA does not regulate pharmacy practice but can step in if the pharmacy is considered to be mass producing rather than compounding. The FDA may inspect any pharmacy at any time to validate that the medications are stored, inventoried, dispensed, or sold by that pharmacy are safe. However, the FDA does not designate a pharmacy as FDA approved. If controlled substances are involved in the compounded product, then the Drug Enforcement Administration (DEA) would also have oversight. Additionally, following of the United States Pharmacopeia USP <797> standards for the compounding of sterile medications is expected and is typically inspected by the state boards of pharmacy. The Pharmacy Compounding Accreditation Board (PCAB) sets national standards to accredit compounding pharmacies. Participation with PCAB is voluntary. Including New England Compounding Center, 98% of compounding pharmacies are not currently PCAB accredited.12-15

The NECC was licensed by the Commonwealth of Massachusetts as a pharmacy. Reports indicate that the NECC may have extended beyond its scope of authority as a pharmacy and may have been involved in the manufacture and distribution of prescription drugs without registering with the FDA or the Massachusetts State Board of Pharmacy as a manufacturer and distributor. The FDA is responsible for and oversees manufacturers.3,14

When the NECC was identified as the compounding pharmacy responsible for the contamination, authorities found the pharmacy’s records showing their clean room had tested positive for bacteria and mold over the past year. The NECC did not take corrective action. The investigators also found failure to use sterilization equipment for the necessary time to assure the drugs were safe. Two of the three steroid tainted lots were shipped before results of sterility testing were confirmed. The NECC may not have followed generally accepted manufacturing processes.3

Each time contaminated compounded products harm patients, consumers, clinicians, and society assumes a valuable lesson was learned, and corrections were implemented to prevent this from occurring again. Unfortunately, we are relearning this lesson. As of March of 2013, two separate compounding pharmacies have posted recalls for potentially contaminated products.16