For over 50 years a small group of ASA liaisons have represented anesthesiologists and our patients at various national and international standards-making organizations. In the United States, a standard is usually a document arrived at by a consensus of interested individuals and/or organizations, and approved by a recognized body. “In reality, a standard is an agreed restriction for a common good and a shared benefit” (personal communication, Michael Jaffe). 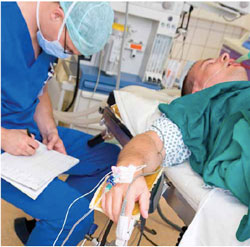 Many organizations and individuals participate in the process. These include professional organizations, manufacturers, and interested individuals. The overall goal of codes and standards is to improve safety. However, some groups may be primarily concerned with cost savings or marketability of their products.

The National Fire Protection Association (NFPA) is one organization that publishes over 300 codes and standards. The ones that are of interest to the health care industry include NFPA 1—the National Fire Code; NFPA 50—the Standard for Bulk Oxygen at Consumer Sites; NFPA 55—Compressed Gas and Cryogenic Fluids Code; NFPA 70—The National Electric Code; NFPA 99—The Health Care Facilities Code;1 and NFPA 101—The Life Safety Code.

Normally, each of the NFPA codes is eligible for review and revision every 3 years. The 2012 edition of NFPA-99, which is the main document of interest to anesthesiologists, was rewritten completely. However, this process took 7 years. There are many significant changes to NFPA-99, many of which were a direct result of the participation of ASA’s liaisons in the process.

The process to change a code or standard begins with the submission of a proposal. These proposals are then reviewed by a technical committee (TC) that has expertise in that area. ASA has representation on the technical committees on piping systems, electrical systems, and medical equipment. Once the TC votes on the proposal, it is then open to public comment. After the comment period closes, the TC will meet again to consider the comments. If the proposal receives favorable action from the TC it then is up for vote at the general assembly. After final approval, it will then be an addition or change to the standard. Clearly, it is essential to participate at the TC meetings, in order to have changes adopted.

The 2012 edition of NFPA-99 has many significant changes. We will discuss some of the important changes that are of interest to anesthesiologists. The latest edition has transitioned from a standard to a code. This means that it is more likely to be adopted by the local authorities and jurisdictions as a regulatory code. Another significant change is that the document uses a risk-based, rather than an occupancy-based model. Previous editions classified buildings and requirements based mainly on size. Thus, a large, 500-bed acute care hospital had many more requirements for systems like back-up power and oxygen, than a small 2 or 3 operating room Surgicenter. In the new code, the risk to the patient of a failure of a system will determine what systems are needed. Therefore, if that small Surgicenter is doing general anesthesia, then they will have to have the same emergency backup systems as a large hospital.

In the past an anesthetizing location was defined only as a place where general anesthesia was given. That would not apply to the modern practice of anesthesia. We now have the ASA’s definitions of “levels of sedation” written into the code. This will directly impact how the code is applied, and whether or not a treatment area will be considered an anesthetizing location.

In previous editions, the code only applied to new or remodeled facilities. An important change to the 2012 edition, are provisions that apply to existing facilities. This includes the maintenance and testing of certain systems.

There are new requirements for the maintenance and testing of the medical gas and vacuum system. In addition, the personnel maintaining these systems must be qualified to perform these operations. These qualifications are defined in the code, and the aim is to ensure that individuals working on medical gas pipelines are properly trained and competent to do the work.

The code now allows medical gas and vacuum systems to be used only in areas where they will be under the direction of a licensed medical professional. Section 5.1.3.5.2 states that “medical gases shall be used only for the following purposes:

Clearly, using medical gases for purposes such as drying endoscopes is not an approved application.

A proposal was approved by the TC on medical equipment, whereby manufacturers of ozone sterilizing equipment could tap directly into the patient oxygen pipeline. We felt strongly that the oxygen pipeline should be used only for the purposes stated above.

Drs. Ehrenwerth and Barker spoke strongly against this proposal at the general assembly, and subsequently it was defeated.

The code was reorganized to remove the bulk oxygen central supply requirements from NFP-99 to NFPA-55 (Compressed Gases and Cryogenic Fluid Code). A new change allows the pipeline supplying the bulk oxygen, from a source outside the building, to be split inside the building. This would allow the 2 sections to operate at different pressures. Thus, one could be for normal patient use, and the other could be at a higher pressure for a hyperbaric pipeline. Previously, separate pipelines would be needed, from the source. This change has significant cost-saving possibilities.

The requirements for medical air compressors have also been tightened up. The requirements for air quality have been improved, and the location of the air intake for the compressor(s) is more stringent. For instance, the intake can not be located where motor vehicles are running and where exhaust gas may be drawn into the air compressor.
This edition of the code now allows hospitals to make their own medical air, by blending nitrogen and oxygen. This has potential cost savings over the purchase and maintenance of medical air compressors. Of course, these mixing systems would need to be monitored to assure that they are getting a correct 21% oxygen and 79% nitrogen mixture.

Several fires have been reported in systems where the surgical vacuum and waste anesthesia gas disposal (WAGD) systems have been combined. These fires occurred in systems that used oil lubricated vacuum pumps. The new codes require that if the institution is using oil-lubricated vacuum pumps, then the total concentration of oxidizers (O2 + N2O) shall be maintained at less than 23.6%. If this can not be achieved, then the institution must use pumps that utilize lubricants that are safe in high oxidizer environments.

In 1984, NFPA acknowledged the elimination of explosive agents from anesthetizing areas. Subsequently, the requirement for isolated power in operating rooms was made optional. An unpublished study by a large hospital consortium claimed that isolated power was unnecessary and extremely costly to install and maintain. This was the impetus for many hospitals not installing isolated power in new or remodeled operating rooms. In the following years, ASA’s liaisons made several unsuccessful attempts to reinstate isolated power. The rewriting of NFPA-99 presented an opportunity to revisit this important provision. The ASA and anesthesiologists all across the country felt that additional electrical safety measures were necessary in the hazardous environment of the modern operating room.

We introduced a proposal to change the code so that all new or remodeled operating rooms would default to be being a wet procedure location. Hundreds of anesthesiologists submitted comments to support this proposal, and we were able to show that the cost estimates by the consortium were were grossly overstated. Although the opposition was strong and well-organized, we were able to persevere. Therefore, the 2012 edition of the code states that all new or remodeled operating rooms will default to being a wet procedure location. That means that special electrical protection in the form of isolated power, or ground fault circuit interrupters (GFCIs), will have to be installed, unless the facility does a risk assessment to prove that certain ORs are not wet locations. This is indeed an epic victory for ASA and our patients. Other relevant changes include a requirement that all electrical/gas booms be inspected on a regular basis, and that a minimum of 18 electrical outlets be installed in a critical care area and 36 in an operating room (the previous requirement was 6!).

ASA, through its liaisons, can make significant changes to national codes and standards. However, this requires an in-depth understanding of the code making process for that organization, the ability to form alliances, and a long term commitment to working within that organization. During the past 7 years of developing the new NFPA-99 code, ASA representatives have been able to have a major input into the process, and thereby make significant changes that will improve the safety of operating room personnel and our patients.

The author would like to thank Jonathan Willard and Michael Jaffe for supplying reference material for this article.