Laryngeal Mask Airways (LMAs) are used routinely during general anesthesia. Vigilance toward possible airway obstruction is important even when LMAs are optimally placed. A broad differential diagnosis, if respiratory insufficiency occurs with an LMA in place, should include equipment failure, as the following case highlights. 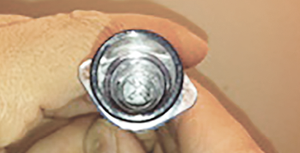 Photo 2. View of cap in lumen of Ambu LMA. 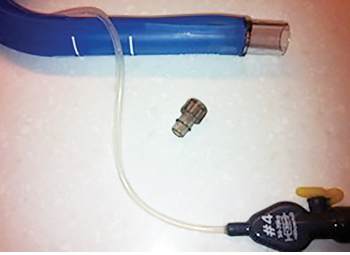 A healthy, young female with a upper respiratory tract infection undergoing a radiofrequency ablation of a femoral tumor under CT guidance had an LMA placed uneventfully following intravenous (IV) induction with fentanyl and propofol. Immediately after placement of the LMA, elevated airway pressures of >41 cm H2O were noticed, along with an upward sloping capnograph tracing and small tidal volumes of approximately 135 ml. The chest was silent to auscultation. Bronchospasm, laryngospasm, and LMA malposition were included in the differential. Treatment was undertaken, including ascertaining proper LMA placement, of 20 mg of succinylcholine (IV) and repeated administration of aerosolized salbutamol, without improvement. When the patient began breathing spontaneously, she showed signs of respiratory distress with significant intercostal retractions and use of accessory muscles of respiration. She remained hemodynamically stable with SpO2 of 99% during the entire episode. Attempted introduction of a Fiberoptic Bronchoscope through the LMA was not possible due to the presence of an obstructing piece of plastic wedged within the lumen of the LMA. The LMA was removed, replaced with another, and the procedure was completed uneventfully.

The plastic piece was a cap (see Photos 1-3), which had fallen off a reusable facemask sometime during processing or sterilization at the hospital. At our institution, facemasks and LMAs are often placed in the same kidney basin to be sent for processing. Presumably, the cap from a facemask came off and became lodged in the LMA’s lumen during the course of processing. It was not readily apparent upon visual inspection of the LMA pre-insertion (see Photo 1).

Fortunately, the cap did not enter the patient’s airway, and the patient did not suffer injury. Following this incident, we have changed our facemasks to a model without removable plastic caps. We have also added the process of passing a brush through the lumen of LMAs during the cleaning process. A quick pre-use inspection of reusable LMAs is also encouraged as it may reveal damage or the presence of an intraluminal foreign body.

An understanding of processing procedures of reusable equipment is important for the clinician. The inadvertent introduction of foreign materials during processing of reusable airway devices, such as occurred with the LMA of our patient, is a rare but preventable complication, which is potentially harmful or even fatal.