Thoracoscopy results in less blood loss, less postoperative pain, less respiratory dysfunction, and a faster recovery than open thoracotomy. To facilitate visualization, one-lung ventilation (OLV) and carbon dioxide insufflation into the pleural space optimize the surgical-visual field.1 While carbon dioxide (CO2) is usually well tolerated, CO2 can be readily absorbed through inflamed or disrupted membranes such as the peritoneum or pleura. Anesthesia professionals must be aware of the conditions under which CO2 may be absorbed in large volumes, as well as its potent biological effects.

We report a patient with extensive pleural adhesions who developed abrupt, extreme hypercapnea following CO2 insufflation prior to instituting OLV. The cause of this hypercapnea was identified as a surgical rent in the lung producing a bronchopleural fistula—functionally adding large volumes of exogenous CO2 gas to the “inspired fresh gas” in the trachea. Urgent treatment required placement of a bronchial blocker to isolate the afflicted lung. End-tidal CO2 concentrations immediately decreased. We recommend providers routinely consider OLV for thoracoscopy patients where raw pleura is present or there is substantial risk for transection of blebs and bronchioles.

A 73-year-old male with a long history of tobacco use and chronic obstructive pulmonary disease (COPD) was brought to surgery for thoracoscopic-assisted esophagectomy for esophageal cancer. Seven years prior, he had undergone a right upper lobectomy for cancer. His pulmonary function tests showed an FEV1/FVC and FEF25-75 at 54% and 11% of the predicted values, respectively, along with a significant diffusion defect. Additional significant previous medical history included hypertension, hypothyroidism, gastroesophageal reflux disease, and a moderate size aortic aneurysm.

The surgeon thought insufflation of CO2 into the pleural space would provide adequate surgical exposure for the esophagectomy without the additional limitations of OLV. Therefore, after intravenous induction of anesthesia with etomidate, fentanyl, and rocuronium, the patient’s trachea was intubated with a single-lumen, 8.0-mm endotracheal tube. A left radial arterial catheter and a right internal jugular central venous catheter were also inserted, and the patient was positioned prone for the thoracic portion of the procedure. Anesthesia was maintained with isoflurane, fentanyl, and rocuronium. 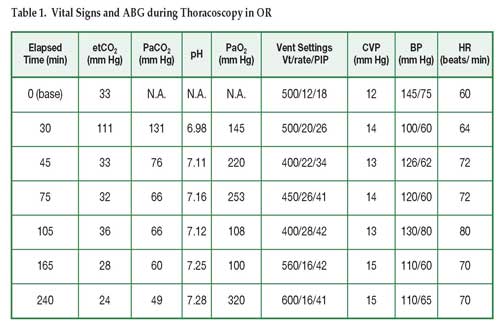 The right thorax was initially insufflated to 8mmHg pressure with CO2, and all hemodynamic and respiratory parameters were stable. Significant, extensive adhesions were encountered from the previous right upper lobectomy. Lysis of these adhesions and lung mobilization created extensive areas of raw pleural surface and several lung blebs were torn. To improve exposure, the insufflation pressure was increased to 14 mmHg. Less than a minute later the end-tidal CO2 increased from 33 to 111 mmHg. The central venous pressure increased to a peak value of 20 mmHg and systolic blood pressure decreased to 90 mmHg, which required treatment with phenylephrine. The arterial blood gases demonstrated the following values: pH, 6.98; PaCO2, 131 mmHg; PaO2, 145 mmHg, HCO3, 24 mmol/L (see Table 1). Insufflation was terminated and all thoracic CO2 released, resulting in an immediate reduction in the patient’s end-tidal CO2 and stabilization of the blood pressure.

An Arndt™ bronchial blocker was placed using fiberoptic bronchoscopy in the right mainstem bronchus to isolate the left lung. A second attempt to insufflate the pleural to a pressure of 8 mmHg with CO2 was well-tolerated, and the procedure continued ventilating only the left lung for the remainder of the thoracic part of the procedure. Although the end-tidal CO2 remained normal (28-36 mmHg), successive arterial blood gas samples showed a persistent acidosis (pH: 7.11-7.25) and hypercarbia (PaCO2; 60-76 mmHg) despite doubling the minute volume. The patient was turned supine upon completion of the thoracic portion of the procedure and again, both lungs ventilated. The patient’s subsequent arterial gases showed near final resolution of the acidosis and hypercarbia following completion of the thoracoscopy: pH, 7.28; PaCO2, 49 mmHg; PaO2, 320mmHg; HCO3, 22mmol/L. The remainder of the procedure was uneventful. The patient’s trachea was extubated the following day and made an uneventful recovery.

Thoracoscopy results in less blood loss, less postoperative pain, less respiratory dysfunction, and a faster recovery than open thoracotomy.2-4 In addition, insufflation of CO2 optimizes surgical exposure, which may be used with or without lung isolation and OLV. Occasionally, patients with limited pulmonary reserve may require thoracoscopy with only CO2 insufflation (while ventilating both lungs) to maintain respiratory homeostasis.5 We report a case of thoracoscopic-assisted esophagectomy in which CO2 insufflation while maintaining two-lung ventilation was the initial approach for surgical exposure in the right chest. However, extreme hypercapnea and hypercarbia developed unexpectedly following a surgical request to increase CO2 insufflation pressure. Severe respiratory acidosis required urgent placement of a bronchial blocker and institution of OLV.

Carbon dioxide is the gas used most commonly for insufflation for both laparoscopy and thoracoscopy. It is nonflammable and, in comparison to other gases, extremely soluble. Soluble gases such as CO2 are much safer in the event of inadvertent gas embolism than less soluble gases such as air or helium.6 However, the high solubility increases its rate of absorption across membranes such as the pleura or peritoneum. Significant absorption of CO2 can occur during thoracoscopy and laparoscopy and result in hypercarbia if ventilation is not increased appropriately. High insufflation pressures can increase the rate of CO2 absorption by increasing the CO2 gradient across the biological membrane surface. In addition, large increases in intrapleural pressures can directly diminish venous return, cardiac output, and blood pressure.7

This patient’s previous chest surgery (right lobectomy) produced significant adhesions that required significant surgical dissection. In addition, large lung blebs were disturbed and produced one or more direct broncho-pleural fistula(s). Thus, insufflated CO2 gas had a direct pathway into the conducting bronchioles, resulting in dramatic hypercapnea. This diagnosis was confirmed by immediate correction of the increased etCO2 after inflation of the bronchial blocker. The persistent elevation of PaCO2 and acidosis despite OLV involved multiple factors. The pleural surface was newly dissected, enhancing CO2 absorption. Moreover, CO2 elimination is also impaired in
patients with increased dead space. In a report of 10 patients undergoing series of thoracoscopic assisted esophagectomy where OLV with a double lumen tracheal tube and CO2 insufflation in the right pleural cavity was used, a 10 mmHg rise in the end-tidal CO2 was noted in all patients that lasted until the end of surgery in spite of increasing the minute volume ventilation.7

The airway in patients with extensive pleural adhesions scheduled for thoracoscopy procedures should be secured with a double-lumen tracheal tube or at least with provision for blockade of the affected bronchus during CO2 insufflation. OLV prior to CO2 insufflation will prevent the inflow of exogenous CO2 gas through iatrogenic broncho-pleural fistulas created during dissection.